Madrid vs. Barcelona Travel: Which One Is Better? 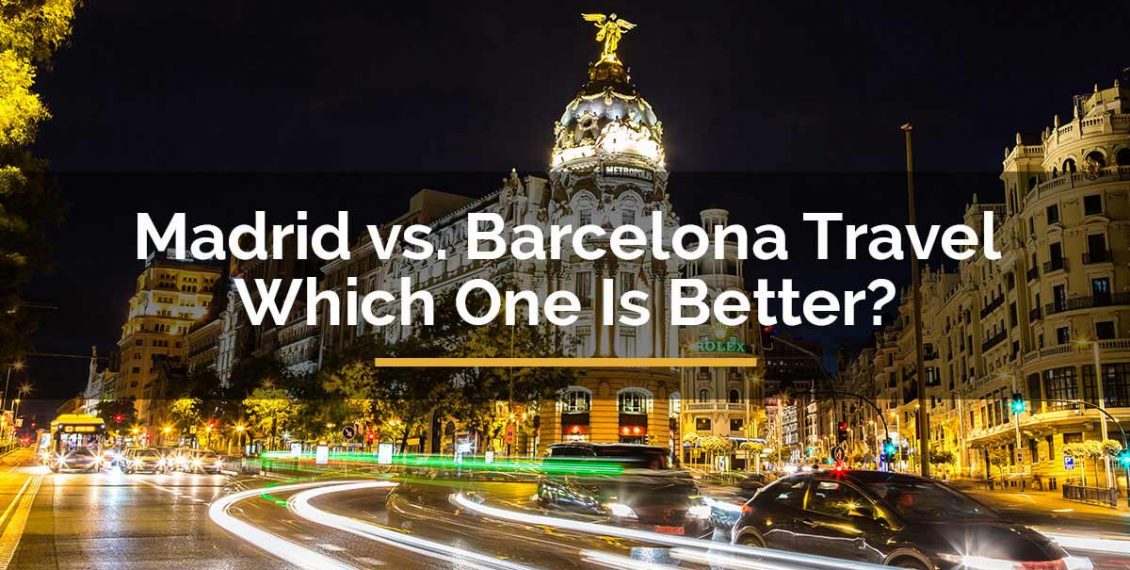 The idea of traveling to Spain is very exciting, but knowing where to go in the country exactly can be overwhelming: Madrid or Barcelona? Both cities offer an exceptional Europe travel experience, but they also offer different attractions and atmosphere. So, Madrid vs. Barcelona travel is not an easy decision to make.

Spain is infamous for the ceaseless battle between Madrid and Barcelona. I personally think that these two cities are spectacular and should be included in every itinerary in Europe, different but great, and it is a bit weird for me to think about the rivalry between these two and the endless questions that go behind the competition. But really, which one is better? Well, to help you decide for yourself, here are points we can compare them to.

Madrid vs. Barcelona Travel: Which One Is Better?
CULTURE
FOOD
WEATHER
SHOPPING
NIGHTLIFE
AFFORDABILITY
GETTING AROUND
SO, WHICH ONE SHOULD I VISIT?

As the country's capital, Madrid has some of most beautiful art museums in the country. The Prado is the national art museum of the country and it also a home to a collection of art from the 12th to the 19th century Europe.

The cultural battle between Barcelona and Madrid is definitely intense. The city of Barcelona is home to stunning sites and historic museums like the Sagrada Familia, the Picasso museum, and Gaudi's artwork which reflects the real Catalonian beauty.

On the other hand, Madrid, the capital city is known as the most accepting and most open city. This is covered in cultural centers and museums and local life can be easily seen on the street.

For me, personally, I like Madrid better when it comes to culture, simply for the reason that it's less touristy compared to Barcelona. Unless you're familiar with the place or you know a local or two, it can be hard to experience the real culture of Barcelona.

Spanish food generally most definitely lives up to the hype all over the country. With every region boasts its home-produced recipes and signature flavors!

It's particularly true in both Barcelona and Madrid. Delightful tapas and old-style Spanish gastronomy are not difficult to find in both major cities. But being so near to the Mediterranean, the profusion of delightful fresh seafood and the wonderful taste of classic Catalan paella provide Barcelona with the edge over Madrid!

One of the biggest differences in the food scene of the two cities is that it's far easier in Madrid to get a free tapas dish together with your drink when going to a bar – while in Barcelona this can be a rare circumstance. So, the winner for this one is Madrid.

During the summer season, July in Barcelona has a sweltering average of 31.2°C while the city of Catalan tops out with an average of 28°C during the months of August. Madrid, on the other hand, gets more sun annually and Barcelona is more humid. But because Barcelona gets less extreme heat, it wins in this category.

Madrid has a big variety of shops. From designer boutiques to big department stores, to everything you can think of. Check out Fuencarral for alternative fashions and make sure to experience shopping at Sunday flea market called El Rastro for antiques and unique clothing.

Barcelona is commonly known as the fashion capital of Spain and here you will find a lot of new, stylish designers and old-fashioned clothing shops. If you are looking for the best boutiques then you may want to go to the Born District, while developing hotspot Sant Antoni has a great selection of vintage options. So, all in all, Barcelona would be a better place to go shopping.

It's said that Madrid offers more bars per capita than any other cities in Europe and this is pretty obvious – a lot of streets in the city center are lined with bars and cafes. You definitely would not go thirsty here.

While when you go to Barcelona, you will see the undeniable amount of the craziest clubs you will ever see in the country. With abundant top notch DJs and entertainers which make Barcelona a frequent stop for tours and concerns, going here at night doesn't include any dull moment. But the Barca club scene can definitely become boring.

Madrid offers similar kinds of clubs with Joy, Capital, among others, but also offers some of the coolest nightlife in the world. Each barrio has their unique vibe, music preferences, and whole streets filled with different places to have fun. So, when it comes to nightlife, Madrid takes the place!

More tourists visit Barcelona compared to Madrid, and this means that they put the prices higher for tourists. It does not mean you can't find anything cheap in Barcelona, though, it is just, you will get cheaper options when you ago to Madrid.

When you go to Madrid you are able to get cod tapas 30 seconds from Sol at Casa Labra for only €1 or a good full meal for only €10 euros by walking around Con Dos Fogones.

So, obviously, if your main concern is money, then you may want to prefer staying in Madrid more.

Both Madrid and Barcelona are comparatively easy to get around compared to other cities in Europe, and both places are pretty pedestrian-friendly with a lot of walking streets. While it is easier for cyclists to get around Barcelona, Madrid definitely has one of the easiest, cheapest and most well-organized metro systems not only in Europe but also in the whole world!

From taxis to buses, subways, and even train system, Madrid transportation is by far offers the best options. Madrid takes the crown in this category!

So, which one should I visit?

Well, the truth is, it depends on the reason why you are traveling. If you are traveling for traditional culture, Madrid has more interesting museums and historic cities, but if you are looking for a more laidback setting, then maybe a beach getaway in Barcelona would be a better choice for you. Madrid and Barcelona are fun, with exciting nightlife, shopping, and food, so make a choice – you are always able to visit your second choice on your next Spanish trip.

If you're planning a trip to Spain and you're undecided between Madrid and Barcelona, both of these places are the destination for a lot of visitors every year. Whether you're interested in Spanish architecture, history, cultural traits, or other elements, you are able to find these in both Barcelona and Madrid.

Madrid is famous all over the world as a cultural and historic center and for the energetic nightlife, but both of the cities offer a lot of attractions and activities for an excellent Spain trip that you wouldn't forget.

But then again, the final decision will depend on a lot of other factors, which includes your preferences and purposes.

So which one would you rather go to Madrid and Barcelona and why? Share it in the comment below!