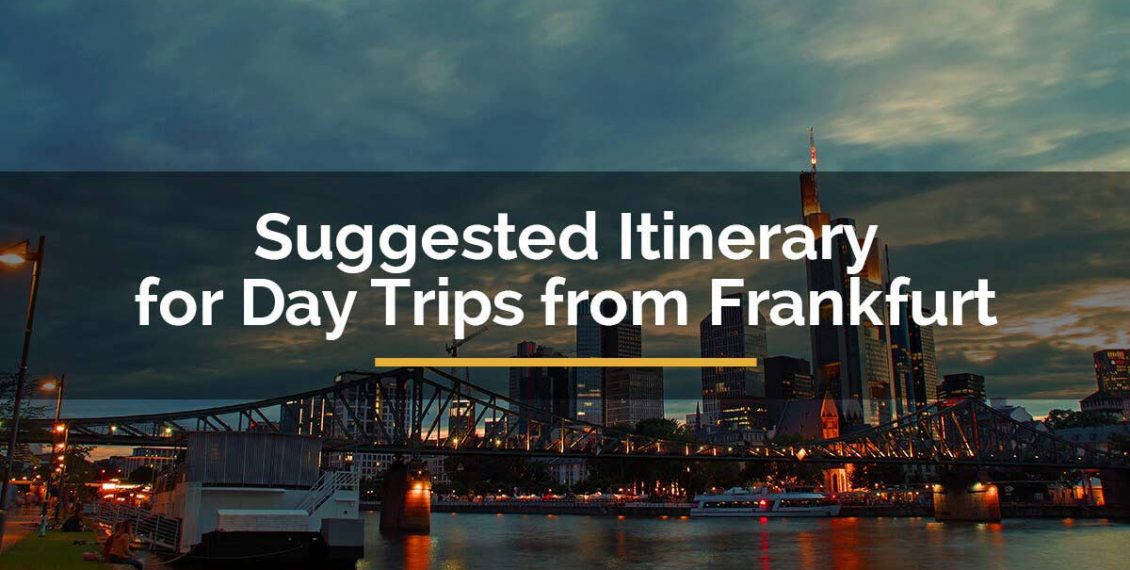 Situated in western Germany, not far from the French border, Frankfurt is a European leader in commerce and business. Its airport is one of the busiest on this continent and the city attracts people from across the globe.

What Are The Benefits Of Traveling Alone?
5 places for day trips from Frankfurt
Mainz
Heidelberg
Stuttgart
Cologne
Bamberg

Located near the Rhine river, the city is a perfect base to explore the fabled Rhine River Valley. This region is home to excellent Reisling wine, spectacular scenery and classic as well as modern architecture.

If you happen to be in this area for business or for pleasure you will not be disappointed. To help you fully enjoy it, I've listed five of my favorite easy day trips from Frankfurt. They are as follows:

Read on and discover why so many people love this part of Germany.

5 places for day trips from Frankfurt

Where the Rhine and the Main rivers meet, you will find Mainz. This city of about 200,000 people has roots going back to the Roman era, though you probably won't find any centurions today. It is also the city where Time Magazine's man of the millennium, Johannes Gutenberg invented the printing press, so the world has Mainz to thank for that.

Getting there is a snap! With just a 25-minute train journey from Frankfurt, you can be in the city for only €4.10. Once in the city, just about everything is accessible by foot, making it the perfect day trip.

A great place to start your exploration of the city is at the Dom Cathedral of St. Martin and St. Stephen. For a real treat, try visiting on a Tuesday, Saturday or Sunday when the farmers market is in full swing. Grab a quick lunch of Leberkäsweck (meatloaf on a bun), wurst with senf (choice of sweet or spicy mustard) or Fisch Brötchen (herring and bread), from about €2.

Also be sure to check out the Stephanskirche, where you can see world famous blue Chagall stained glass windows. For a great view, try venturing up Kupferbergterrasse or the Zitadelle or take things in from one of the bridges that stretch over the Rhine.

The last time I was in Mainz was during the summer, but many reckon that the best time to visit is during the February Carnival season. If you are lucky enough to go then, you'll find huge street parties, parades and revelry. See you there!

This charming city is somewhat of a rarity in modern Germany. Unlike most German cities, Heidelberg was spared from bombardment during WWII. This means that its traditional architecture is preserved and you can stroll the medieval old town like it was 1397, without the stench of raw sewage of course.

Located roughly one hour south of Frankfurt by train, a one-way ticket with cost you about €25. Buses also run frequently from Frankfurt.

When you arrive, make your way to the Alstadt (city center) and stroll the Hauptstraße, rumored to be the longest shopping street in Europe. The cities most attraction is Heidelberg Schloss (castle). Still regal and majestic, it provides a stunning background to the city. For a small fee, you can tour the grounds and be royalty for a day.

About two hours south of Frankfurt lies the capital of Baden-Württemberg. Located in a valley along the Neckar River, and surrounded by vine-clad hills, this city of nearly 600,000 inhabitants has something for everyone.
Trains regularly run from Frankfurt and can be purchased for as little as €14.25.

To begin, wander around the Bohnenviertel neighborhood. Here you will find cobblestone streets, wine taverns where you can sip the region's famous wines, and funky galleries. After an afternoon here, you'll forget you are in a bustling, big city.

For a truly unique experience, check out the Schweine museum, or "Pig Museum". Devoted to everything pork and pig related, you will find paintings, toys, as well as food and beer in this converted slaughterhouse.

Art Museum Stuttgar﻿﻿t is another great way to spend the afternoon. Housed in a massive glass cube in the center of the city, it is home to over 15,000 pieces. It also has the world's most important Otto Dix Collection.

The fourth largest city in Germany, Cologne (Koln) is a regional cultural hub. It is situated on both sides of the Rhine River and is about 80 km from the Belgian border. It's also the place where the scented perfume got its name.

Getting there from Frankfurt is an easy 90-minute train ride and will cost about €20.

While there, look out for the twin spires of the Cologne Cathedral. Taking about 600 years to complete and supposedly the resting place of the relics of the Three Magi, this site is not to be missed.

Other cultural offerings include the Museum Ludwig, home to a Picasso collection that rivals those in Paris and Barcelona. Additionally, this city is home to Kolsch beer, a distinctive brew native to the city. This delicious golden drink is similar to pilsener, though I find it to be a tad bit sweeter. At Haus Töller, you'll find this and other excellent german beers, as well as hearty food.

If you venture east for another day trip from Frankfurt, you will reach the city of Bamberg, in Franconia. The city sits atop seven hills, each crowned with a church. If you fancy wandering around a well-preserved medieval city, then Bamberg just might be your place. Designated a UNESCO World Heritage site, it's worth the trip.

To reach Bamberg, the easiest thing to do is hop on the train. At about €19, you'll get there in just over two hours.

As you amble around the city, be sure to visit Little Venice, a section of the city constructed in the middle ages on the banks of the Reignitz River. Fisherman still ply the waters for the catch of the day. This area comes alive in August for the Sanderkwa, a festival that celebrates local Bamberg beer.

So what's so special about Bamberg beer? Well, the local brew, known as Rauchbier, or smoked beer, is just that. Legend has it that a fire broke out in a local monastery, smoking some of the barley. The thrifty monks brewed the smoked barley and Rauchbier was born. Enjoy this smokey favorite at one of the nine breweries found within the city. My favorite: Brauerei Schenkerla. It's not the oldest, only having opened in 1678, but it's reputation for smoked beer is well deserved.

I really hope my suggestions for day trips from Frankfurt help you to decide where to visit. This region is a fascinating part of the world and there are always more places to discover.

Do you have further suggestions? Please share and comment. We look forward to hearing from you and hope you have a great trip. For more, check out our post on traveling with kids in Germany. Be safe and happy travels!