What is the Weather in Ireland in October? Check out the answer! 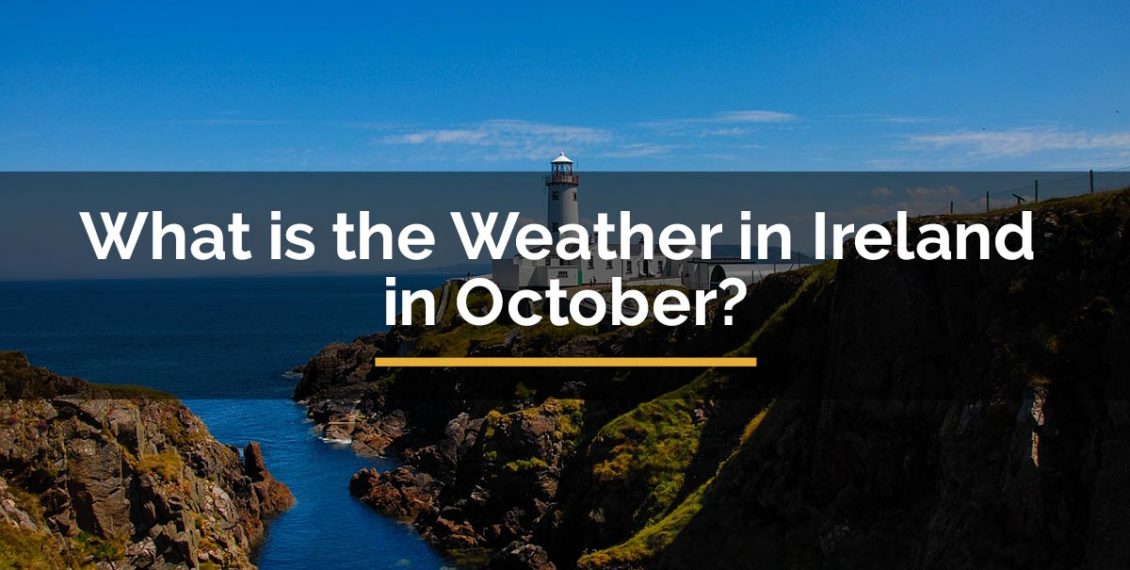 No doubt that Ireland is an amazing country to visit. Not only Ireland offers a lot of things to do, but this is a country filled with beautiful green meadows, beautiful landscapes, wide lakes, as well as rivers. There are many sub-tropical plants, lively pubs, and generally amazing environment. In this country, no matter what time of the year you visit, you will enjoy its natural beauty. Ireland is a country of appeasing rural sceneries, where many surprises waiting to be discovered.

But the question is, what can you expect about the weather in Ireland in October?  Is it the best time to go to Ireland?

The month of October is a month for autumn in Ireland, with the highest temperatures hitting between 64°F and 57°F. But generally, you can expect a mild, moderate climate.

Why Visit Ireland in October

Most tourists would visit Ireland during the summer when it is considered peak season. However, autumn is not a bad choice at all!

Weather in Ireland in October is ideal for harvesting. The country’s perfect environment is defined by its bright of fields and grasslands even during the late autumn. You are also able to see the country’s lush colors even from an airplane or other higher places.

But not only that, but it’s also time for many events and festivals in the country. Annually, there are many tourists who visit the country for different music festivals. But other than that, here are some more important reasons why you should take advantage of the weather in Ireland in October.

​Even though this might sound so obvious, it is definitely worth mentioning that the off-peak season, mainly during autumn, is far more laidback compared to the peak season. With fewer people, you will get a chance to see the wilder landmarks of Ireland like the Giant’s Causeway, Cliffs of Moher, as well as Connemara and other attractions like the Belfast Titanic Experience or Jameson Distillery without having to deal with the heavy flow of tourists.

On top of that, the children are back at school, so it means you’re not only avoiding international tourists, but also local tourists who want to see the wonders of their own country.

As the summertime goes away, flights, accommodations, and activities lower their expenses to off-peak rates, which means that you will get the same thing as you would when it is summer, but cheaper.

Rather than having to find the middle ground or compromise on the availability of accommodation, you can easily choose from many options available.

What to expect in the weather in Ireland?

- It Hardly Freezes During the Winter

Many people wouldn’t believe when someone tells them that winter in Ireland, in general, is not too cold. In fact, the average temperature in the country on a daily basis was about 50 °F, and snowing is not very prevalent. It and if it snows, it doesn’t last for a long time. Actually, it simply doesn’t get cold enough to produce snow. Even though Ireland is located on pretty far north, it’s an island that gets warm and receives moist winds from the Atlantic Ocean that makes the weather pretty warm. So, you don’t have to pack a lot of thick clothing! Always keep in mind that Ireland weather is usually mild, but can still be pretty unpredictable.

Again, because of its unpredictable weather, it is very important for you to prepare yourself for it by bringing different types of clothing. One minute, the sky might look dark and cloudy and the next minute it will be sunny and bright – get yourself ready for these changes. You can say that this is a common occurrence in Ireland. So, the best thing you can do is do layering. By doing so, you can simply take off the top layer if it gets warm unexpectedly after raining a little.

- Rain Shouldn’t Be A Threat

Perhaps the only negative thing about the weather in Ireland in October, specifically in the latter part of it, is that there’s a bigger chance to rain. Even though it’s not the rainiest part of the year, late October gets more rain. But then again, it’s something you shouldn’t be too worried about as the skies get clear, with short rain and then sunshine after that. Even though frequent, rain tends to be light; it is rare to experience heavy downpours. No matter what time of the year it is, western Ireland gets more rain compared to the eastern part of the country. Higher elevations get more rain than lower elevations.

If you are worried that your hair will get wet, then you might want to pack some hooded poncho. Umbrella, however, is not really necessary. You will not see a lot of people who use it.

All in all, the weather in Ireland in October tend to be mild, and you can deal with humidity and some rain. This is when the Gulf Stream ocean current brings warm water to the shore of Ireland and moderate air temperatures. This is why Ireland hardly experiences bitter cold and intense heat. Due to its coastal location, the temperatures of the air don’t differ significantly between everyday high temperatures and evening low temperatures. This is generally true in beach areas that are close to the curbing influence of the waters.

As you can see, October is a good month for visiting Ireland. Just make sure that you prepare yourself for the unpredictable weather. If you have other questions about this topic, we will try our best to answer them in the comment box below!

Top 7 places to visit in France

How to Get from Athens to Santorini