Is Bangkok safe? Make Sure to Read This First! 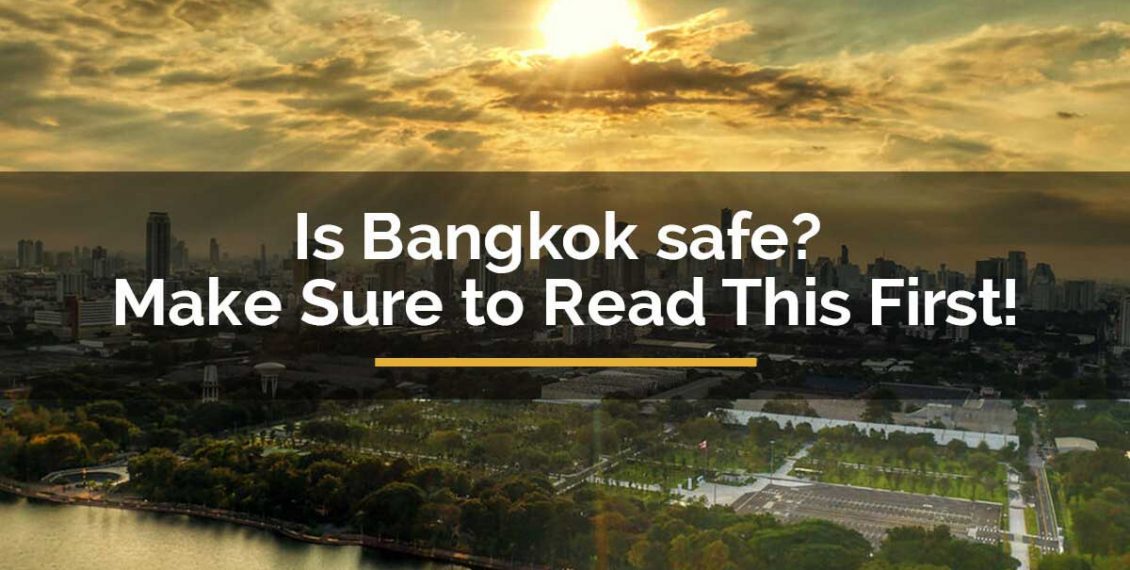 There’s no doubt that Bangkok is one of the world’s easiest and most interesting cities to experience. Its colorful streets, delicious and distinctive local cuisine, vibrant culture, and just the fact that it’s affordable, are some of the reasons why the capital city of The Land of Smiles. But back to the more important question… is Bangkok safe?

Is Bangkok safe? Make Sure to Read This First!
How Safe Is Bangkok?
​DANGERS AND SCAMS TO WATCH OUT FOR
Crime Threats
Tuk-Tuk and Taxi Scams in Bangkok
Pickpockets in High-Traffic Areas
The Pen Scam
Fake Jewelry Scam
​Safety Tips
Join Reliable Tour Groups
Secure Your Money and Credit Cards
Don’t Trust Your Passport to Others
Avoid using Illegal Drugs
Don’t Accept Drinks from Strangers
Conclusion

How Safe Is Bangkok?

In most cases, the safety, danger, and hassles you may experience in Bangkok all depends on your own approach. By using common sense, you’re more likely to have a more fun experience. Of course, just like anything and anywhere, there are negative things that may take place.

​DANGERS AND SCAMS TO WATCH OUT FOR

As one of the most visited cities in the world, traveling to Bangkok, of course, comes with some precautions, along with different dangers and warnings to be mindful of before you go. Here are the most common ones.

Most criminal activity is limited to street crimes like pickpocketing, purse snatching, petty theft, tourism fraud, and jewelry schemes. A lot of tourists have had their wallets, passports, wallets, and other stuff stolen in crowded areas of Bangkok. Pickpockets usually cut into pockets or bags using a razor to remove items sneakily. There have been cases which involved drive-by snatchings from robbers on motorbikes.

Violent crimes like assault, rape, and murder are, fortunately, pretty rare. When they happen, they normally happen at night, usually when the victims are alone and/or drunk.

Sexual violence usually takes place at clubs and parties. There were cases where offenders using scopolamine or other drugs that will spike drinks, for the victim to sexually assault or rob their prey.

Tuk-Tuk and Taxi Scams in Bangkok

There are two main types of transportation in the city: tuk-tuks and taxis. Both forms of transport are safe. However, there have been many reports from tourists that many taxi drivers don’t turn their meters on.

This trick is very common among drivers who want to scheme more money from their riders. So, before riding a taxi make sure to ask the driver to turn the meters on first, and if he refuses, then refuse to ride the taxi as well. It’s also a smart idea to always bring a map or put out a map on your smartphone with you to make sure that the driver would not take you to a longer route for an additional charge.

Tuk-tuks carries the same problems for many travelers. They don’t have a meter; so, make sure to negotiate the price to your destination first. Furthermore, make sure that there will be no extra stops. Bangkok tuk-tuks sometimes take riders to tuxedo shops that give them a commission for bringing tourists as potential customers.

Bangkok is mostly considered safe, especially in comparison to other bigger cities in the country. However, it doesn’t mean it can’t happen. Make sure to secure all your stuff and be vigilant when you are in a crowded area.

A common scam to watch out for is what is known as the “pen” scam. Throughout this trick, a person will ask if you have a pen. Usually, they will tell you first that they just have to write down or fill up something. Then, as soon as you reach out to take a pen out of your bag, someone will sprint out to snatch your bag. Be careful whenever a stranger approaches you.

The pen scam isn’t the only way that pickpockets will try to make you fall into while in Bangkok. Another popular scam is when a street vendor tries to sell you fake jewelry to you. This is very common around the Golden Palace. In this scam, the culprit will convince you to buy “real” Thai local clothing or jewelry. These are fakes or at least worth much less than the amount they are selling them for.

As you can see, the possible problems you may encounter in Bangkok are mostly the same as how it usually like in most big cities in other parts of the word.

But can we avoid it? You know already that you can! Of course, you know that common sense plays a big part in keeping yourself safe from danger while traveling to Bangkok. However, there are some top important things you must consider and those things are the following.

If you are planning to visit Bangkok on your own, you may want to join a tour group that is reliable. Keep in mind that there is safety in numbers. On top of that, you will be able to meet people with the same interests as you. But then again, don’t trust people easily. At the end of the day, they are still strangers to you.

Secure Your Money and Credit Cards

Bangkok is a beautiful place, but it is also infamous for its different scams. When you walk in crowded places, always put your bag in your front while holding the zipper securely. Be cautious of pickpockets and secure your money and credit cards. When withdrawing your money from an ATM, make sure to check if the machine has a skimming device. For more details, check this link​​.

Don’t Trust Your Passport to Others

In rare cases, taxi and tuk-tuk drivers ask for your passport as a security. And of course, as a smart person, you shouldn’t comply with this! If they keep insisting that you give them your passport, then just find a new taxi. Again, make sure to negotiate the price first before hopping on the taxi.

There are tuk-tuk drivers that will try to take as much money as they can from you, especially if you don’t look like a local as they will assume you don’t know the right amount you must pay to get to your destination. To avoid this, it’s better to take service from a ride-hailing app like Grab.

Let’s be real, finding drugs in Thailand is so easy and even though it might be tempting for some, keep in mind that it calls for trouble. Don’t risk ruining your entire vacation for just a few hours of fun. Remember that carrying and using drugs is illegal in Thailand, and serious penalties apply to those who are caught. There have been cases where the seller is the one who turns the buyers in and extorts a lot of money.

It might look like a nice gesture, but free drinks from a stranger might mean that you’re a target for something. You should keep in mind that there’s a big chance that there’s drug in that drink especially if you are alone. You may end up falling asleep and waking up without your belongings, or worse, you won’t wake up at all!

Before agreeing to do something in Bangkok, always think twice and consider the possible outcome of your decisions. Evaluate the situation wisely in order avoid getting tricked and getting yourself into trouble.

From how you dress, how you abide the law, customs, transports, and culture, everything in Bangkok is pretty different from what westerners are used to. It’s definitely worth it doing a research before going to make sure you’ll have a stress-free trip.

Most of the time, using common sense towards their own safety when traveling to Bangkok is enough to ensure that you will have no problems. Also, always have an open mind anywhere you go and remember that Thailand is a developing country.

So, if you’re one of many people asking “is Bangkok safe?” hopefully, this article has helped figure out the answer. If it did, make sure to share this article on your social media. On the other hand, if you have questions, make sure leave them in the comment box below!