Thailand Weather in December: Where to Go and What to Do in Thailand in December 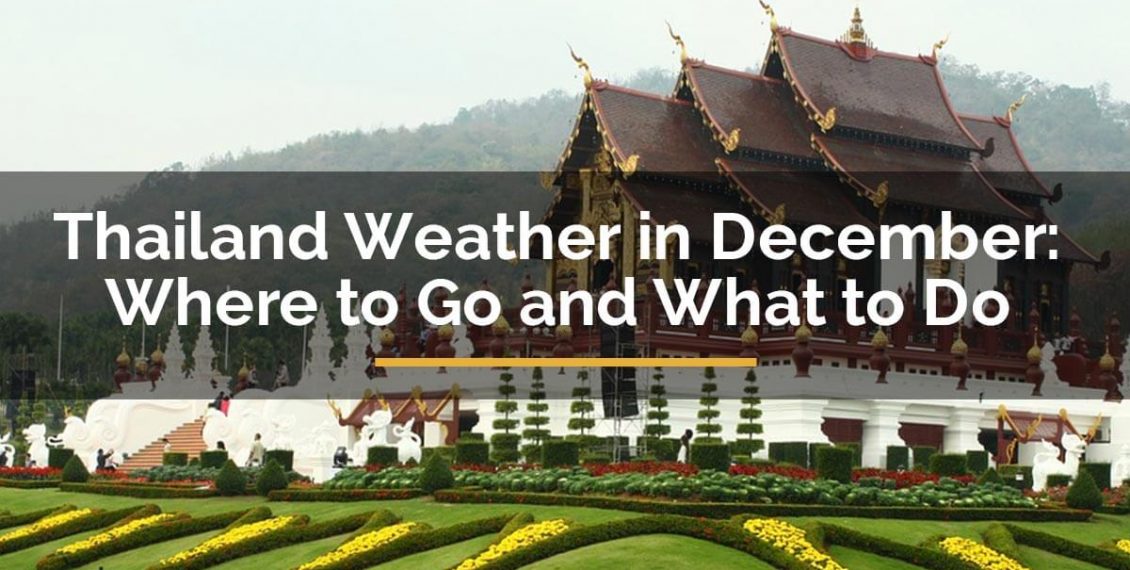 During the winter season in Thailand, you can expect for the level of humidity in December tend to be lower which make exploring the country a lot more fun and comfortable – no wonder why Thailand weather in December is considered one of the best times to visit the country.

Night time temperatures in the northern part of the country tend to attract some tourists, so if you’re planning to visit in December, be ready for this. Cities like Chiang Rai and Chiang Mai usually get so cool instead of cold in evening and it is normally still warm enough when wearing short-sleeve tops, but if you go to more rural and mountainside regions like Pai, it could be really chilly at night.

You are likely to see locals in north Thailand wearing thick jackets, gloves, and scarves as they ride their motorbikes around. On the other hand, most western tourists may find a light jacket enough to protect themselves from cold.

Generally, the rainfall levels in Thailand in December are low, with Koh Samui having the highest amount of rainfall during the month. This is due to the effect of the northeast monsoon on Koh Samui as well as other parts of Gulf Coast.

The amount of rainfall normally drops off considerably on Koh Samui by mid-December, but it’s still possible that you might catch some rain during your trip. This might also be the case for other regions of Thailand, mainly during the first parts of December, but as the middle of the month approaches, most parts of the country enjoys a continued period of sunny and dry with chilly evening weather.

The tropical climate of Thailand is characterized by soaring temperatures and humidity all year round. The months of April to May offer the hottest temperatures while the temperature in June tends to be the monsoon season, which usually brings heavy rain up to the month of October.

Known as the best season to visit the country, the months of November to February are pretty mild and sunny, with the levels of humidity going down and temperatures cooling off. The average climate of the country during this month varies from 30°C at the lowest in December and rises up to 36°C from the months of January to April.

Light clothing that’s not very revealing would be a great choice when traveling to Thailand. If you’re not sure of what to wear, you can always find pieces of clothing when you get there.

Weather in Thailand in December by Region

Again, the weather in the country is usually tropical in the southern part; with everything getting hotter and quite humid as a certain time of the year approaches. The southern and central parts have the same temperatures any time of the year, while you will experience more rain in hilly parts. The country is dominated by two monsoon seasons: the northeastern monsoon of November-April carries drier weather compared to the southwestern monsoon of May-October. That is when everything is cloudier, warmer, and pretty humid.

It is winter in Bangkok! However, although it’s considered to be the coldest time of the day, daytime temperatures would probably still the same with a cool, pleasant evening that may require you to wear a light jacket.

In the month of December, the sun usually shines for at least 9 hours a day, but you have to be ready for rain as they last for usually 2 days of rainfall throughout this month. The region experiences about 40mm of rainfalls throughout this time of the year, with temperatures largely settling from 21°C to 31°C.

Bangkok’s regular average temperature this month is normally around 26°C. So, bring a small umbrella just to make sure. At the same time, it’s the driest time of the city. The highest temperature that is ever recorded in Bangkok in December is 37°C while the lowest is 13°C. However, the temperature during this time of the year just plays around its average.

Similar to Bangkok, Koh Chang, as well as the surrounding islands, is in its best condition during the month of December. With a very little rain, a lot of sunshine, and calm mid-range temperatures, heavy flow of tourists is inevitable, so, prepare yourself for this!

Like mentioned earlier, Chiang Mai and neighboring areas see a little rain and generally comfortable in December, at any time of the day. Evenings could quite cold and if you are planning to trek, you must be properly geared up for it. Personally, this is the best time to visit the area as it is very comfortable and exploring the mountainside makes you less fatigue even if you are hiking or trekking for hours.

Just like the Central and Northern Thailand, temperatures in the Northeast will be roughly as adequate as it gets— even colder in the evenings — and a little bit of rain can be expected.

The only part of the country that experiences quite a lot of rain in December is the Gulf Coast of Thailand. You must expect a little bit of rain from day to day, but between the rains, you can still get decent flashes of sunshine to make your trip nice and fun. Regardless of the rain, December is still one of the busiest times of the year, especially for Ko Pha Ngan and Koh Tao.

If you are looking to experience an even better weather, then is the place to go. Thailand's west coast in December offers a lot of sunshine with a bit of sporadic rain shower. The weather is certainly better on this part of the country compared to the Gulf Coast — although not better than Ko Chang. Some islands, such as Ko Phi Phi are high season in December.

Most Visited Thai Islands in December

As I already mentioned earlier, great weather all over the country makes every island a great place to go. The popular islands like Phuket, Ko Phi Phi; Ko Lanta located on the west coast,  Ko Pha Ngan, and Koh Samui, and Koh Tao located in the southern Gulf; and Ko Chang, Ko Samet, and Ko Kut in the east coast, are all packed with tourists.

Thailand weather in December not only allows for visitors to explore the country under a great condition but also allow them to enjoy the country’s many celebrations and holiday traditions. More than 11 million people visit this amazing country every year, and December is definitely the busiest. Here are some Thai events you may want to look forward to on your trip.

Thailand mainly consists of Buddhist followers, and while Christmas is not widely celebrated in the country, there are places where you can feel the spirit of it. Star of David festival, which held in late-December is where you can find it all!

You will be joyful to see colorful and bright light displays, Santa Claus, and a cheerful parade. You will see religious figures and setups that will make you feel like you’re not in Thailand. This area boasts some of the nicest holiday decorations you’ll ever find.

Another December celebration is The Laguna Phuket Triathlon. This day is an "iron man" competition with participants from different parts of the world. You can watch the competition as the participants run, cycle, and swim, cycle to the finish line.

And of course, Thailand's New Year Countdown, which is one of the best celebrations in the country, is something you should not miss. While each town and city has their own celebration, Bangkok does it the biggest. If you go to one of the celebrations, you are able to expect some music festivals and folk songs and classical dance performances from the different provinces. It is something both locals and foreign visitors would truly enjoy.

With many beaches, vibrant nightlife, exciting activities, rich culture, and friendly people, Thailand is no doubt an amazing country to go. If you are wondering when to visit the country, keep in mind that Thailand weather in December makes it one of the best times to go.

If you enjoy reading this article and find it helpful, don’t hesitate to share it with your friends. If you have other questions and suggestions, let us know about it in the comment below! Make sure to also read more of our travel tips in this blog!