What Is The Gay Capital Of The World? This List Will Tell You! 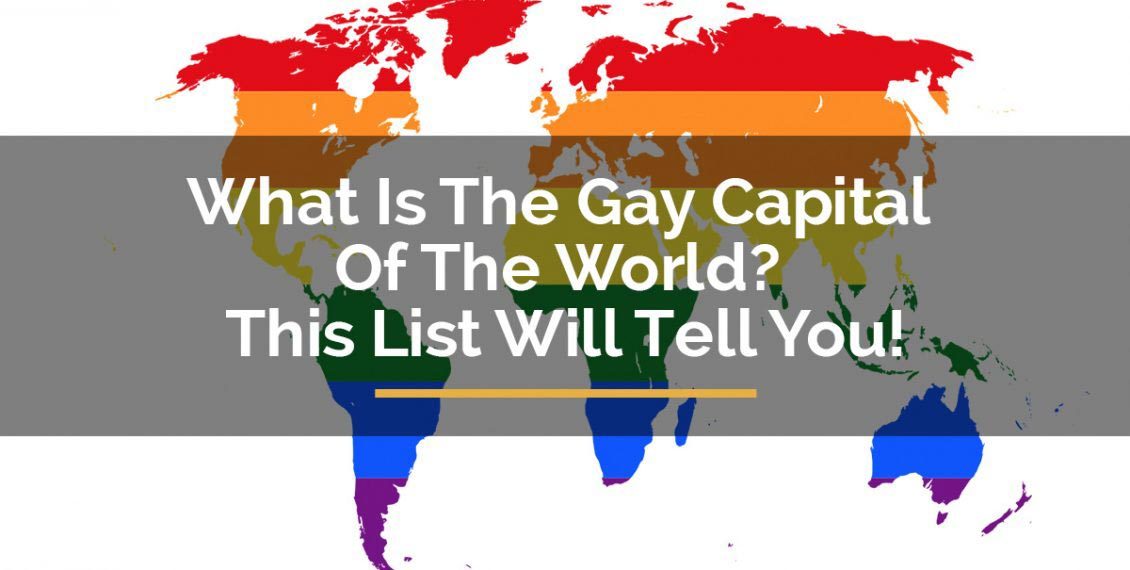 Even though there are plenty of progressive cities all over the United States, like San Francisco, New York, Chicago, and Seattle, some members of LGBT community feel like living in the US isn’t always safe for them. This is very unfortunate because, despite gay rights activity being practiced in the past few years, there are still many gay individuals dealing with discrimination. Nevertheless, there are a lot of cities all over the world that are passing massively liberal legislature defending the gay rights. Below are some of the cities in the world that can be labeled as the gay capital of the world.

The Netherlands has become the first country in the world to authorize gay marriage in 2001. Amsterdam has always been known as an open-minded society. Along with this, the country has also passed different laws fighting discrimination against LGBT community. They also have legalized gay adoption and they also allowed gays to serve military first. Many neighboring countries like Sweden, Norway, and Belgium have followed the same route and legalized gay marriage as well, which makes the whole region a very gay-friendly place.

Another European city on the list, Barcelona in Sp​​​​ain has always been known for its kindness towards homosexuality, and now, the rest of the country has finally followed suit. There has been legislation passed authorizing same-sex marriage and gay-parent adoption. Barcelona is now in the front line for broad-minded cities that offer a safe and friendly environment for gay couples.

When you travel to Thailand, you can definitely never be alone. The Land of Smile can also be labeled as the Gay Capital of the World, as it welcomes any visitors with open arms. Bangkok is known to be a land of diversity when it comes to vibes, harmonies, and ethnicities. As for the city’s welcoming spirit, the westerners have generally influenced gay culture in the country. The country, not only the capital has become more open to gay culture. These days, you can even find commercial places that have just been opened to support the increasingly high amount of gay individuals in the country.

You may think that Argentina is too religious to be a gay-friendly place; it has changed now, though. They’ve moved forward in legalizing gay marriage. The city is known for its active nightlife with a lot of clubs and entertainments catering to the LGBT specifically. Now with these new laws to protect them, it’s even more interesting place to go if you are looking for a gay-friendly travel destination.

London boasts some of the largest and most open gay communities in the entire world. There have been some equality laws have been passed and now the gay individuals are now allowed to get married and adopt kids. Of course, on top of this, London has always been in advance of the gay cultural scene and it known to be one of the safest places for gays to travel.

Not many people are aware that Tel Aviv is a very liberal city with a huge population of the LGBT population. The city also has a lot of destinations and establishments catering gay community. In fact, Gaycities.com named Tel Aviv as the gay capital of the Middle East. It has an exotic Mediterranean laid-back attitude after Tel Aviv beat New York as the best gay city in the world in their reader poll a couple of years ago. From Tel Aviv Pride Week to its well-known Shenkin Street, gay bars and free gay city tours, this city is surely ideal for every type of traveler.

This may not come as a surprise; Melbourne happens to be building a Pride Centre devoted to LGBT culture, which is expected to compete LGBT Community Centre in San Francisco. Melbourne has a bevy of clubs, bars, restaurants, shopping and events for gays and lesbians from world-renowned Melbourne Queer Film Festival through to the popular Sunday afternoon drinks at the Railway Hotel. Taking a trip to the neighboring town of Daylesford brings you some the top mineral springs of the country and as well as a big population of LGBT that brings together a biggest queer festival of the country called Chillout Festival.

Canada is a country that is very close to the US yet has different gay legislation. From same-sex marriage to same-sex parent adoption, gays have not feared of declaring their sexuality and even serve in the military. Considering the vicinity of the United States, it is an astounding difference to our society that it’s still so fixated on discriminating homosexuals. It’s not surprising to find many gays immigrating to Canada so as to have a family.

When you talk about civil liberties and rights, Mexico is not always the first country to come up your mind. However, even within the fairly straight country, this city has proved liberal enough to legalize gay marriage. Even the rest of the country hasn’t allowed gay marriage yet, but it is a great step for a widely religious country. Mexico City also has a big gay and lesbian population. You are able to enjoy local theater gay shows, and gay clubs, which are listed in newspaper entertainment sections, with trendy restaurants and reasonably priced luxury hotels, exciting nightlife, and a yearly Gay Pride parade.

In a lot of countries all over the world, attitudes towards gay travelers can be really different from what you’re used to in your home country. So, when you travel, see to it that you practice the tips below:​​​

A great way to make sure that you are staying in gay-friendly accommodation is to book through LGBT-specific sites for booking your accommodation. Some of the websites you can use include Misterb&b, Ebab, and GayHomestays.

Make sure that you do your research information regarding gay laws for the destination you want to go before you book your flight. Wikipedia is an informative source to begin as it has a useful article on LGBT rights by country. Keep in mind that laws relating to the LGBT community may vary suggestively by country; there are countries that recognize same-sex marriages and civil partnership while there are a lot of others that still have laws in place which set punishment on same-sex sexual activity that can be as bad as the death penalty.

If you’re traveling and experienced harassment, don’t forget to file a report with the authority. Most countries have local LGBT organizations that can guide you on this matter. There are also a lot of cities have LGBT centers that offer STD and HIV testing on top of volunteers that may help you with LGBT rights problems.

No matter where you decide to go, just have fun and stay safe! Keep in mind that not all places in the world are open to the third sex, so, unfortunately, gay people are the ones who have to adjust. All in all, there is no specific place in the world that is officially known as the gay capital of the world. However, I hope this article helped you decide which city you should go next!

So, which place do you think should be the gay capital of the world? let us know in the comment below!

Ways for Expats to Make Their New Destination Feel Like Home