Want To Know What The Drinking Age In Spain Is? This Article Will Give You the Answer! 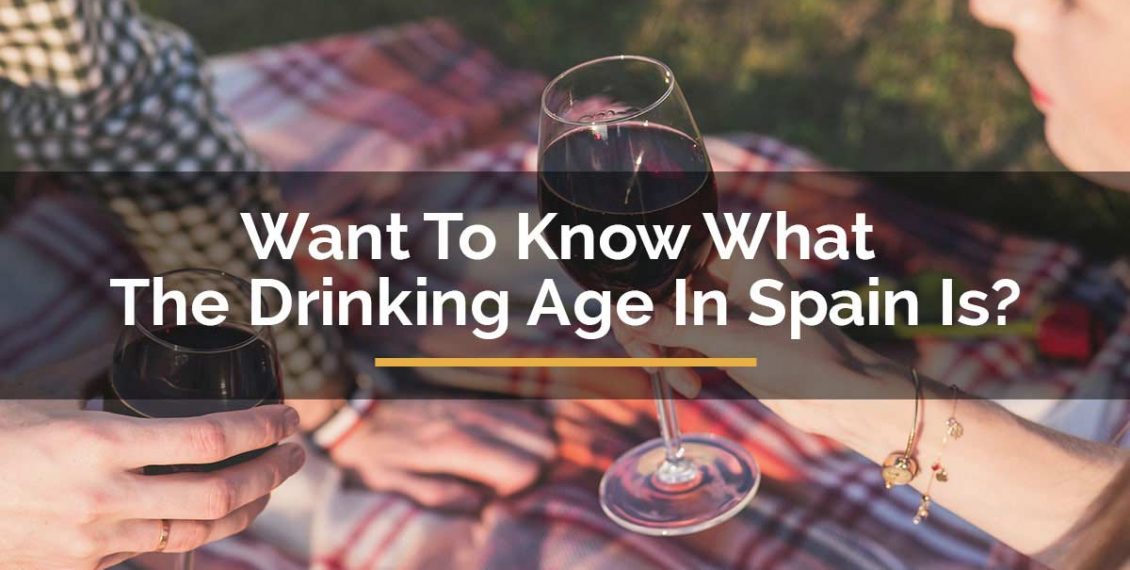 Food and drink play a big role in Spanish culture. If you’re lucky enough to visit Spain, you will undoubtedly delight in the tasty alcohols the country has to offer. However, just as for most fun things in the world, there are specific rules and laws for drinking in Spain that you should aim to follow in order to be a considerate visitor to the country. One of the important questions you have to answer before you partake in the local drinking culture is, "What is the drinking age in Spain?".

Want To Know What The Drinking Age In Spain Is?
Drinking Age in Spain
Buying Alcohol
Drinking Like a Local
Don’t Forget to Toast!

The legal drinking age in Spain used to be 16 years old, just as it remains in Italy today. However, there have been many incidents related to teens getting drunk. As a result, in 2009, Spain changed its law and raised the drinking age to 18 years old.

This law applies to drinking in restaurants too. However, young teens below 18 can drink alcohol as long as they’re monitored by a guardian. Therefore, waiters wouldn’t be able to intervene if a parent ordered an alcoholic drink and then offered it to their teenage child. But of course, bartenders and waiters still need to be aware of these legal limitations and must refuse to serve unaccompanied minors.

Teens under 18 are also not allowed to buy alcohol, so if they want to drink - even if only a light beer or a glass of wine -, their only option is to ask an adult to buy it for them. The law says that it is illegal for minors under the drinking age in Spain to purchase alcoholic beverages. However, there are no regulations about teens drinking in their own homes.

The law says that establishments selling and serving alcohol to teens under 18 will be penalized. They can be charged a fine ranging from €30,000 all the way up to €600,000.

As you might already know, Spain is well-known for its excellent wine production, so it is common to allow minors to take a little sip in order for them to get accustomed to the taste. The law focuses on serving and selling alcohol to minors, while exceptions are made if a parent offers it to their children under their supervision.

Well, if there’s a law that prevents those under the drinking age in Spain from purchasing alcohol, then there’s also a law that prohibits stores from selling alcoholic beverages after 10 PM. This is in order to avoid “botellion,” a Spanish phenomenon whereby drinking outside turns into a street party with many loud drunk people. The law seeks to avoid these gatherings, as they are often disruptive to neighbors and they can lead to damage of public places and private properties.

If you're above the drinking age in Spain and you like to drink like a local while traveling, then there are a few things you need to know to fit into the Spanish nightlife scene. While many choose to go to local bars earlier in the evening, it’s generally only to have a few glasses of drinks and enjoy good food. In Spain, people normally have their dinner around 10 PM or sometimes even 11 PM, and they only begin their evening afterward. Before 11 PM, you’ll notice that the only people out in bars will be confused tourists trying to figure out where all the locals are.

When midnight strikes, you’ll suddenly see these half-empty bars magically start to fill up. There are even some bars that don’t open until around 4 AM. Most clubs keep going until 6 AM or 7 AM. While you’ll need to pay an entrance fee to get into one, you’ll normally get a free drink too.

The downside of starting later, however, is that you’re probably going to sleep in late the next day. For Spanish party animals, going to bed at 3 AM is considered early.

All countries have their own unique signature toasts, and most of them are to show respect to the country! In Spain, "Salud!," which means "Health!," is the most common way to cheer. However, there might be an instance or two where it will be obligatory to participate in a lengthier toast.

Tempted to go enjoy a glass of rioja around some tapas or try out the vibrant Spanish nightlife after reading this? Start planning your trip to Spain with one of our favorite guidebooks:

Partying and drinking play a big role in the fun-loving culture of Spain. The Spanish nightlife, particularly in the city of Madrid, is mythical. On top of that, it is not reserved only to young people. There is definitely a part of every town or city that is suitable for every age group and every taste and preference.

There are, however, some things you need to remember aside from knowing what is the legal drinking age in Spain. Bear in mind that you have to go out late if you really want to see the country’s nightlife. If you go to the bars before 10 PM, chances are you will be spending the next hours drinking on your own.

So, what do you think about the drinking culture in Spain? Do you have any question or personal experience you want to share on this topic? Let us know in a comment below!