What Is the Drinking Age in Italy? You’ll Be Surprised to Know! 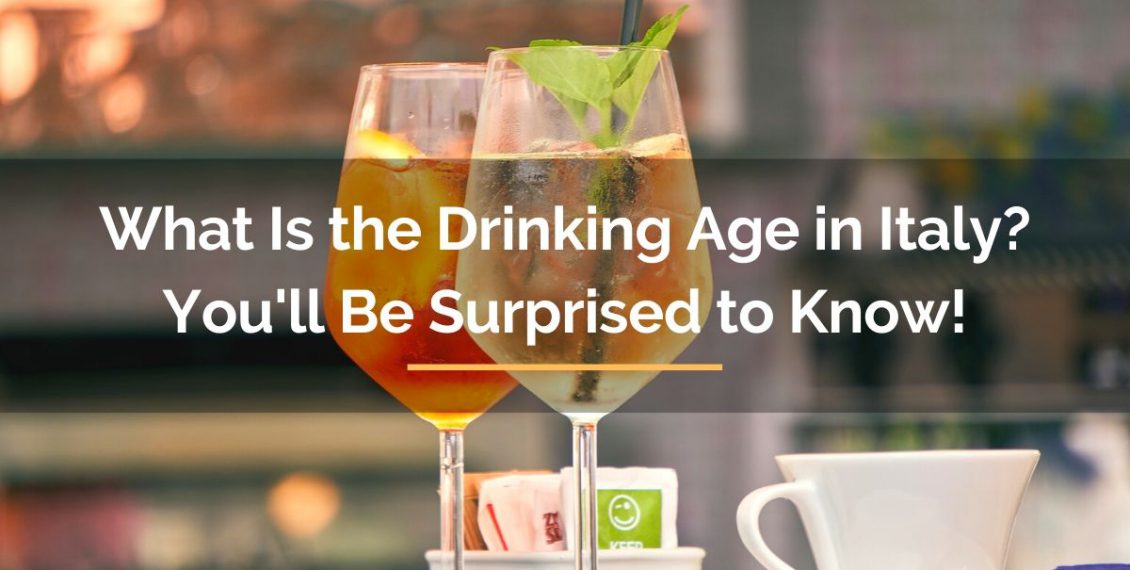 When travelling to Italy, it's not easy to miss the party since most major cities like to enjoy la dolce vita and live it up. However, you have to know that drinking in Italy isn't the same as in most other countries in the world. And more importantly, it's essential to know the answer to the question, "What is the legal drinking age in Italy?".

The reason I say this is that Italians are not really a nation of what you might consider "drinkers" – at least not to the same extent as in America and other countries in Europe.

The thing about Italy is that drinking is often an accompaniment to certain activities, and getting drunk is usually frowned upon. Public intoxication brings shame not only to yourself but also to your family. This is quite different from Anglo-Saxon cultures, where this kind of behavior can sometimes even earn you admiration and respect from the people around you. But for many travelers visiting Italy, the first question they need to answer is, “What is the drinking age in Italy?”

What is the drinking age in Italy

Moreover, there is no heavy penalty for teens drinking under 16 years old. It’s socially acceptable to drink alcohol as long as you are with your parents. The law is rarely enforced. When it comes to minors' drinking, Italy is a liberal country. There are many minors in the country who commonly enjoy alcohol, especially on special occasions. It is a part of the country's cultural practice, and this relaxed approach is totally normal in Italy.

According to the Italian penal code, a restaurant owner or bartender can be jailed for serving alcohol to customers aged below 16, as well as to people suffering from mental disabilities. Some restaurants and establishments may indeed refuse to serve minors even if they are with their parents, although not all.

Of course, this is fairly different from other countries like the United States, where minors are not given such leeway to drink alcohol. There’s not a big cultural tradition, at least in the past years, of minors drinking alcohol for the sake of pleasure, as a generally accepted thing. In Italy, on the other hand, this is very different. There are rules to protect minors, but otherwise, drinking is seen as more of a social activity than an offense.

As the legal drinking age in Italy is 16, locals under that age are also not allowed to purchase alcohol in Italy. Even though it’s prohibited for minors to purchase alcohol in the country, it may happen, as in some cases sellers may not care enough to check customers' age. Unlike in America, fake IDs are not common in Italy. Usually, minors' parents buy alcohol and let them drink at home, so it’s not very necessary.

However, you still have to keep in mind that although minors don't incur any direct penalties or illegal charges for drinking alcoholic in public, if they get caught drinking alcohol, they still need to be identified by the authorities and, preferably, bought to their parents.

Beyond the legal drinking age in Italy, there are a few other things that are useful to know to help you blend in and enjoy the local culture:

What to drink in Italy

Italian drinks play an important role in Italian culture. Everyone, all over the world, enjoys Italian food. After all, who could resist spicy, crispy crostini, a wickedly rich plate of pasta, and of course, a large slice of freshly baked pizza? But another interesting question is, what are the signature traditional ltalian drinks?

Since you already have the answer to the question what is the drinking age in Italy, the next thing you may want to know is what drinks you should choose. If you have not been to Italy before, it might be hard to tempt you away from the many delicious wines. But anyone who has experienced this beautiful country knows that just like their food, Italians take their drinks very seriously. Therefore, there are many great concoctions to try.

In Italy, every meal is considered a social event that can last for hours. It is normal to start the meal with an aperitif that helps to whet the appetite. Aperitives can be cocktails, wine, liqueurs, and any Italian mixed alcoholic drinks for adults, or Italian non-alcoholic drinks for minors. Bellini is one of the most popular cocktails you can try in Italy. It is a mixture of champagne and peach puree.

Another one you must add to your list of Italian drinks is Campari. With 25% alcohol content, it is normally enjoyed with wine, soda water, or cocktails. If you love citrusy flavors, then make sure to try out Limoncello, a famous lemon-based drink from Southern Italy.

​When dinner is served, the wine starts to pour. If you want to try the most popular Italian wine, then go for Chianti. Initially, this wine originating from Tuscany was made from white grapes. However, throughout the years, it turned into a delicious red wine. It is normally consumed with red meat or creamy pasta. If you opt for a lighter meal, for instance fish or seafood, then a dry white wine like Pinot Grigio will work perfectly. Lastly, a must-try sparkling wine option is Asti Spumante.

Another drink Italy is well known for is coffee. However, if you want to try something more adventurous, then you may want to spike it with a drop of alcohol. Most of the time, this is done with nut liqueur or cognac, but Bailey's and Vov are also common.

As you can see, the legal drinking age in Italy is different from the lawful age in most parts of the world. Here, the drinking culture considers the enjoyment of alcohol a part of the culture rather than an offense - as long, of course, as it is done in moderation. However, as a traveler to Italy, you must follow the law even if the regulations related to the drinking age in Italy are not as strict as in other countries like America. Anyway, drinking is not really necessary for people to have fun!

So, what do you think about the drinking culture in Italy? How does it compare to your country's? Let us know in a comment below!