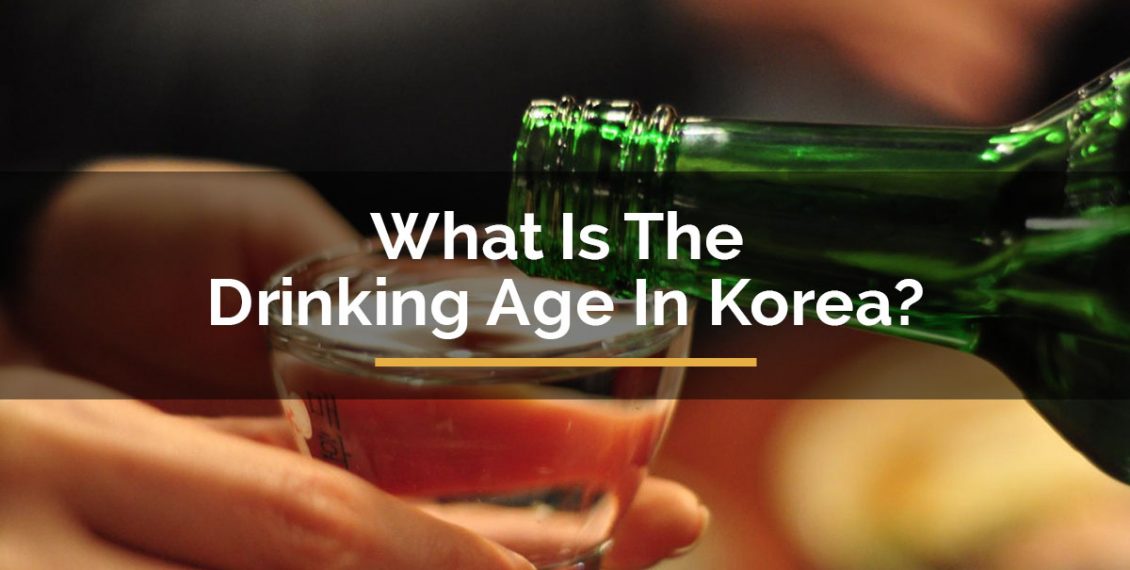 Drinking is a big part of Korean culture. As a foreigner, drinking with Koreans will give you the chance to truly immerse yourself in the local culture and customs. This is partly due to the existence and availability of many unique Korean alcoholic drinks. So, if you are visiting The Land of the Morning Calm, one of the best ways for you to truly experience the local culture on a deeper level could be to try out the country's special brews. But, what is the drinking age in Korea? Let's check if you’re old enough to have alcohol there!

What is the Drinking Age in Korea?

While the legal drinking age in South Korea isn’t strictly enforced, keep in mind that it’s nevertheless always better to follow the law when you're abroad. Underage drinking is somewhat restricted by bartenders' reluctance to serve younger people alcoholic drinks.

The legal drinking age in South Korea is 19 years old.

Although 19 might sound like an odd drinking age, it is the same as in many Asian countries – for instance, it is close to the drinking age in Japan. In most countries in the world – aside from the United States, where the legal drinking age is 21 years old – 18 years old tends to be the norm. South Korea, therefore, falls somewhere in the middle.

However, keep in mind that the Korean age system is kind of different – for Koreans, you are 1 year old as soon as you are born. This means that the drinking age for international visitors is actually 19 years old. Meanwhile, the legal drinking age for the US soldiers based in Korea is 21 years old.

There are no open container laws in South Korea, so you might see many people strolling on the street and drinking alcohol in public. However, you must avoid drinking and driving in South Korea at all costs, as the country has zero tolerance for it.

Bars and nightclubs normally start operating from 6 pm to midnight on week days. Venues often have longer opening hours at the weekend, so some might be open from 12 in the afternoon up to very late in the evening, or even until the next morning.

In bigger cities, you can find bars that run 24 hours a day. The most popular alcoholic drinks in South Korea, soju and beer, are widely served not only in bars but also in grocery and convenience stores. Wine is normally mostly available in specialty shops. Classic Korean drinks, like makgeolli, are usually found in the trendiest restaurants and bars. Alcohol is available in many different places, including convenience stores, supermarkets, and department stores.

One of the main reasons why the country has a big drinking culture once you're past the drinking age in Korea is that it helps people to lose their inhibitions and socialize. After a few shots of soju, even the shyest person is more outgoing and talkative. So, if an acquaintance suggests going out to have drinks with you, it’s probably because they need an icebreaker. On top of that, for Koreans, having some quality time over alcohol creates a stronger bond. This seems to be true for both social and work relationships.

While South Korea is becoming stricter when it comes to checking IDs at convenience stores and bars, it is really easy to procure a drink when you're in the country. By going to the nearest convenience store, you can get a bottle of booze for a few thousand won. Indeed, alcohol here is a lot cheaper than in the West!

While it’s not normal for people here to drink during working hours, having a drinking dinner with your co-workers, especially on Friday nights, is very common as long as you're over the drinking age in Korea. And as you would expect, soju and other alcoholic drinks are the stars of the table. There are many possible reasons why people may gather for an after-work dinner. One of them is that it gives everyone a chance to get to know each other and to build stronger relationships. So, it would be a shame not to go and share that experience.

What to Drink in South Korea?

Of course, you can find almost any type of drink in South Korea, especially in bigger cities like Seoul and Busan. But when visiting the country, wouldn’t it be a shame not to taste the unique drinks made in Korea? Here are some Korean drinks you may want to try.

The oldest drink in Korea, Makgeolli (Mokk-oli) is a mixture of yeast, fermented rice grains, and boiled water. Since it is unfiltered, this drink has an opaque white color, as well as residue at the bottom. It is usually served cold in a teapot and poured into a smaller glass.

This drink is sweet, carbonated, and tangy – it tastes like champagne! Makgeolli is a popular drink among young women, but can of course be enjoyed by both genders and at any age (as long as it's above the drinking age in Korea!). It’s best savored with some delicious pancakes.

If you have a sweet tooth, this drink is best had with dessert. Bokbunja Ju (bok-bun-ja-cha) is made from water and fermented black raspberries. Koreans believe that it is beneficial for one's health and that it acts as an aphrodisiac.

Of course, the classic and most widely consumed alcohol in South Korea is the rice spirit called soju. Actually, this drink accounts for 97% of the South Korean liquor spirits market. If you have not seen soju before, this is a clear distilled rice liquor. It is almost as strong as vodka (though not quite).

For locals, drinking it straight up without mixers or chasers is normal – although a lot of Koreans wash it up with beer. If you really want to drink the night away and not be afraid of hangovers, then this is a good drink to try.

If you’d rather have some good old beer, then you’ll be happy to know that you will find a great selection. Some of the local brews you may want to try include Cass, Hite, and OB Lager. They will probably remind you of Budweiser and other pale lagers.

You have to keep in mind that Koreans mostly drink for social purposes and within social hierarchies. As such, there are some things you should keep in mind in order to show respect not only to the people you are drinking with, but also to the culture itself.

If you’re visiting Korea - or in fact, anywhere in Asia - you have to remember that respecting one's elders is taken very seriously! It is considered impolite to pour your own glass. Normally, the oldest person in the group is the one who must pour the drink.

Even if you don’t drink, you may want to politely accept what your host offers; it is seen as a gaffe to refuse the first drink once it has been presented to you.

South Korea has come up with a lot of hangover cures. From drinks drunk before your first glass of alcohol, to soups, or even grapefruit ice cream, Koreans might offer you different forms of ways to cure your hangover. Some of the most common ones include haejjunguk or hangover soup, chocolate milk, Asian pear juice, and Jjimjilbangs or Korean spa.

If you're planning a trip and are over the drinking age in Korea, always keep in mind that it's best to practice moderation when drinking. That said, be responsible, but don’t be afraid to have fun! Historically, South Koreans would enjoy drinking to celebrate special days. It used to be an obligation. Today, however, it has become an excuse to drink with friends and co-workers. So loosen up, enjoy, and prepare yourself for a hangover (and maybe stock up on some of the remedies listed above!).

Read more: A Quick Guide for Your First Trip to Seoul

Hopefully, this article has taught you what the drinking age in Korea is and shared some useful information on this topic. If you have any questions or suggestions to make this article more helpful, let us know by leaving a comment below. Also, don’t forget to share this article on your social media to let others know!

Discover 8 Different Cuisines Around the World