7 of Best Places to Live in Africa 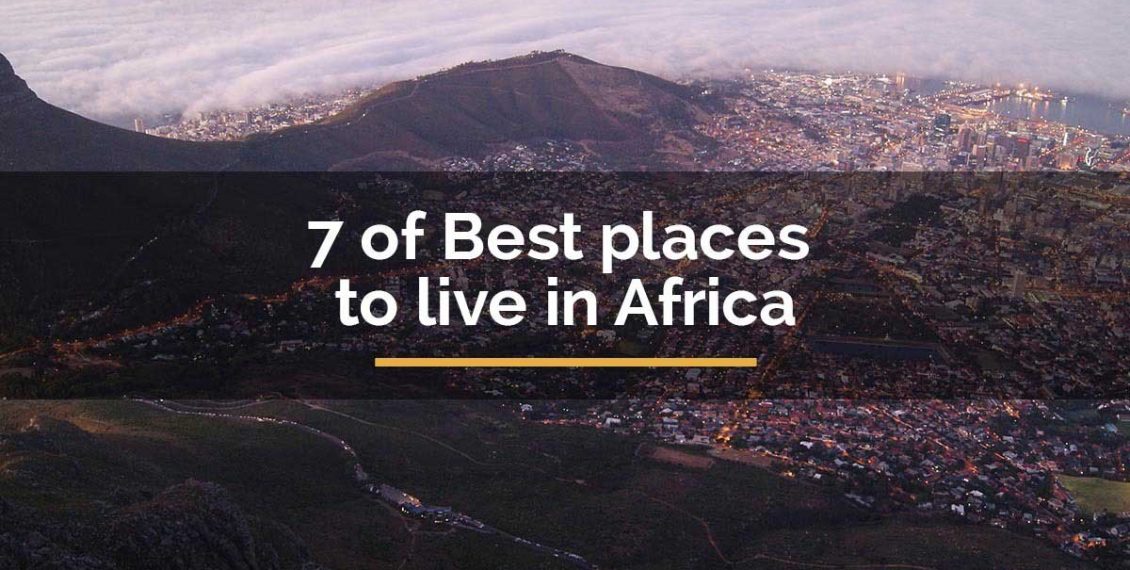 A continent filled with rich culture and natural beauty, Africa is not only a great place to visit, but it also has become a chosen position for those who want to relocate country -- that's why it's not surprising it has always been featured in many travel blogs and magazines.

This doesn’t come as surprise at all, especially that there’s something about this places that keeps attracting people back.

Maybe it is the feeling of a massive wild continent where anything is possible, or perhaps it is breathtaking nature, or possibly the ever-growing economy that gives a lot of opportunity for job hunters and investors.

No matter what your reason is for considering living in Africa, there’s no denying that Africa is a continent filled with livable cities. Here is our list of 7 best places to live in Africa.

For many, South Africa is considered to be one of safest countries in Africa. Cape Town is one of the nicest cities not only in Africa but probably the whole world, having won many respected international travel awards. This place is where most South Africans would rather live.

Nicknamed as “Mother City,” Cape Town is the hub of the insurance and now growing digital sectors in South Africa. It is also where you will find the advertising executives and creative, with a lot of shops and big establishments there.

Accommodations options vary, from Tuscan-styled homes, funky downtown lofts to gated communities. While a crime rate is something you still have to always keep yourself reminded of, it is generally a safe place to live.

With a population of only 325,000, Windhoek is a little city that you can easily navigate and get used to. It will not be difficult for you to meet friendly locals and expats who are also living in Windhoek.

Namibia’s biggest city and capital, Windhoek is a neat and modern city with spectacular pastel-painted buildings as well as old-fashioned German houses.

Exploring the city center of Windhoek is immediately going to show the real beauty of it. The atmosphere there is normally laid-back. Because it’s pretty small and pedestrian-friendly place, it’s pretty walkable. Here you will enjoy the sight of, neo-baroque cathedrals, modern skyscrapers, and German castles.

Another fascinating city, Tunis is a great option for those looking for best places to live in Africa. This city offers a unique combination of cultures and a really varied international taste. With only less than 700,000 people living in it, Tunis might not be the most packed of capitals, but Tunis still equally busy.

If you’re planning to move to Tunis, looking for a place to live can be a challenging task, but this doesn’t change the fact that it’s a good place to live. Because there are more and more expats choosing this as their new home, you can expect to encounter a big community of foreigners living and working in Tunis.

Situated at the northern edge of Africa, it’s not surprising to find that Tunis is one of the parts of Tunisia that is most influenced by Italian and French culture, with street signs frequently written in both Arabic and French language. Another reason why it is one of the best places to live in is that it’s located in one of cheapest countries to live in Africa -- perfect for budget travelers or expats.

Located in a country that can be considered as the best African country to live and work, Flic en Flac is a busy but great village to live in. because this is considered as a touristy place, you can expect to find restaurants and bars lined up along the coastal area. With this growth, Flic en Flac is now has become one of the most well-known resorts of the island along with Grand Bay.

Flic en Flac also offers a developed transport network. It’s a great meeting point where you are easily able to access all the other places in Mauritius like the capital of Mauritius, Port-Louis.

As soon as you set your foot to Flic en Flac, the village will show you its charms through Cascavelle mall. There, you’ll find different types of shops, such as luxury stores, pharmacy, souvenir shops, supermarket, bars, and restaurants.

Located on the Atlantic coast of Morocco, Essaouira is one of the best places to visit in Morocco​, and apparently, best places to live. It gets growing number of expatriates who chose to settle live and work here. This city certainly offers job opportunities to expat professionals, the tourism industry, and businessmen.

By living in Essaouira, you will be able to enjoy a fun lifestyle and a rich cultural life that suits both retirees and young people.

With a prehistoric medina and radiant fortifications that date back to the 18th century, kilometers of spectacular long beaches, and a delightful harbor and fish market to explore, Essaouira is definitely one of the best places not only to visit but also to live.

You are guaranteed to enjoy moments of peace and serenity far away from the chaos of bigger cities. Since this place receives strong wind and currents, you can enjoy surfing and windsurfing in this place. So, if you’re a watersport enthusiast, this is probably the best place for you.

A lot of people still associate Rwanda with the genocide happen in 1994. While that period has had a huge impact on today’s society and will never, ever be forgotten, Rwanda has recovered.

Today, it is a very clean and safe country to visit and live in. you will have a good access to internet water, and electricity.
One of the best places to live in the country is Kigali. Not only beautiful, but this is also one of the safest place to live in Africa. The fact that it’s so green and mountainous makes it a lot more appealing.

It’s not shocking that Kigali is considered as one of the most livable places in Africa. With remarkable urban development plans and impressive road construction, Kigali will provide you with a great quality of life. But then again, nothing will beat the views that will make you don’t want to leave the place ever again.

Kenya is well-positioned for economic development due to its geographic position, its pioneering-aggressive population, and rather great facilities and infrastructure. It is the most civilized country in Africa.

Its capital city, Nairobi is becoming a top for expats looking for the best places to live in Africa. The city has much of the sophistication of the big cities in South Africa, but at the same time offers a laid-back lifestyle. While tensions may take place during the time of the election, the government is generally stable and the city is safe overall. On top of that, it is cheapest place to live Africa.

Living here, you will have housing options that include a lot of comfy suburban-style homes at very affordable prices, just like any other African cities, usually with a big sized land. Apartment compounds have become a popular option as well in the past years, a lot of which have their own fitness centers and swimming pools.

So, there you have it, seven of the best places to live in Africa! Hopefully, this article has become helpful for you in finding your next prospective location. Make sure to read more information about your selected location, especially about their rules on visa and security. If you have other questions or suggestions you want to share, don’t hesitate to leave that in the comment below!

5 Most Dangerous Countries in Africa

Is Morocco Safe To Visit? Here Are All the Information You Must Know

9 Spectacular Places to Visit in Morocco

Nice post and informative. All the information about all country are nice but i like Kagali as i likes mountainous location.

Thank you for sharing! <3