5 Most Dangerous Countries in Africa 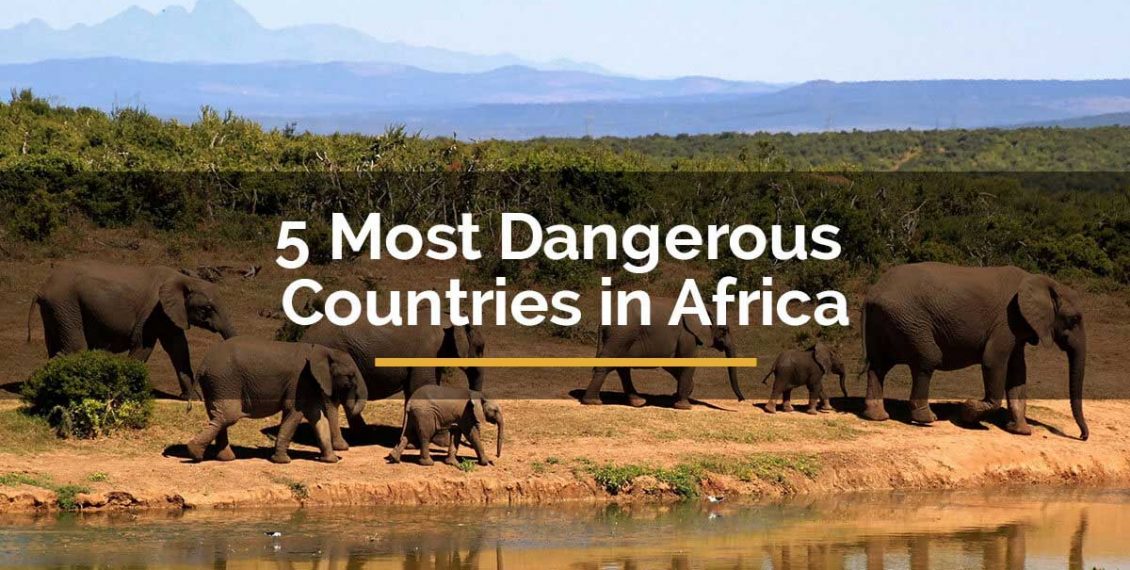 The temptation to travel the world is inevitable. However, despite picture-perfect destinations on every continent, there are also plenty of places that you may want to avoid. Robbery, murder, rape, violence, and kidnapping are all too common in several countries all over the world and could easily pose a threat to innocent travelers. When traveling to Africa, there are places you should avoid for a safer and stress-free experience. Here are the 5 most dangerous countries in Africa you should avoid.

For three consecutive years, South Sudan has been ranked the most dangerous country for humanitarian aid workers, based on the research performed by Humanitarian Outcomes.

In the 2018 Aid Worker Security Report, the authors documented 158 major cases of violence against 313 aid workers in 22 countries last year, wherein 139 people were killed. Approximately one-third of the attacks happened in South Sudan.

Also is the youngest country in the world, Sudan has been on a slope marked by civil war, a debilitated economy, and restricted access for aid distribution since the year 2013, only two years after it gained independence from Sudan.

The country director of South Sudan at the Norwegian Refugee Council, Rehana Zawar, said that guaranteeing the safety of a team of 300 local and international staff members is not easy because of the levels of insecurity and due to some response teams that stay in isolated capacities for up to one month.

Because of the insistent violence in the country, the limited communication capabilities has been limited and basic infrastructure is very wicked – this includes road networks, which makes aid distribution both difficult and expensive.

Somalia is home to the biggest coastline in the whole continent. It has good hotels and delicious food and the gorgeous Almadow Mountains. But one thing you won’t find here – tourists. For years, it has been on the list of countries where not to go in Africa.

In the year 2004, the minister of tourism of Somalia, Abdi Jimale Osman, said that the country had not had an officially-acknowledged tourist in 14 years. As one of the most dangerous places on Earth, this is not surprising. Civil war and fighting among military leader pursuing to gain control of weapons and drug trafficking have left Somalia a wreck of what used to be a beautiful country. From the time when the civil war broke out in 1990, the country is divided into more than two dozen fighting groups.

The owners of the Sharmo Hotel in Mogadishu might serve lobster on the rooftop overlooking the beautiful sea, but they also recommend that visitors employ at least 10 guards carrying weapons to pick them up from the airport to the hotel. The United States does not even have an embassy in Somalia, so you’re really going to be on your own. Cross-border warring, terrorist attacks, and violent street crime with wracking the country day after day.

Crime has become a way of life of many people in the Democratic African Republic. With most normal surfaces of life collapsing day by day, a lot of people have turned to commit crimes. If you really want to travel here, you need to pay attention when you’re entering the country and when traveling to different parts of Democratic African Republic. Together with the relentless security instability, the crime here is truly out of control – a great example of a failed state in the continent.

Kinshasa remains as the most dangerous part of the country, and foreigners continue to be the victims of grave crime, which include armed robbery. This kind of violent crime takes place even during the daytime, so, if you think that daylight will save you, you’re wrong.

Most of this fierce crime is committed by groups pretending to be police. So, always play it smart. Traveling to some areas like Kisangani, Kinshasa, Lubumbashi, and most other bigger cities is largely safe during the daytime, but travelers are advised to be cautious against criminal activities that target non-locals, particularly during traffic jams and areas neighboring hotels and tourist spots.

Remote, remote areas are less secure due to high levels of criminal activity and the lack of passable training, management, and fund for security forces. Security officials and people claiming to be security officers have imprisoned and mugged foreigners in Kinshasa. This form of crime takes place more often during the holidays and before the beginning of school years.

Car thefts, break-ins, and armed robberies take place all over the country; there have been reports of carjackings in the region of North Kivu, which results in deaths.

If confronted by military or security forces, visitors shouldn’t let soldiers or police officers get inside their vehicles nor get into the car of anyone claiming to be a security official. If this happens, stay polite and calm and, if threatened, don’t resist.

The Central African Republic has been going through an unstable state since its independence from France in the year 1960. Even though it is very rich in resources like gold, diamonds, oil, and uranium, it still has one of the poorest populations in the world.

It stuck in chaos in 2013 when Seleka umbrella group’s Muslim rebels held power in the country where the majority of people were Christians. A group of mostly Christian militias, known as the anti-balaka has risen to fight the Seleka.

Seleka has given power to a provisional government in 2014 under international pressure. However, months of violence ensued and the country was successfully divided, despite the presence of a UN peacekeeping power as well as a French mission.

The country is experiencing a globally monitored transition involving a legitimate referendum along with parliamentary and presidential elections.

The security state in Libya stays unstable because of the continuously armed clash, a great risk of kidnapping and terrorist attacks, as well as the erratic political situation and a soaring crime rate. Unexploded artilleries, which include landmines, are a threat all over the country.

This situation is a big shame as this beautiful land has much to offer to fearless travelers. As one of the biggest countries in Africa, Libya brags a spectacular Mediterranean coastline, beautiful desert sceneries, and at least seven UNESCO World Heritage Sites. It has several ancient sites that stand as a reminder of the country’s history: before the regime o Gaddafi and the resulting civil war, the country underwent ruling of the Greeks, Romans, and Italians.

The Libyan population is mostly of Arab and Berber origin. Berbers make up approximately 10% of inhabitants and live in more far-off areas. Majority of the population lives mainly in coastal cities such as Benghazi and Tripoli, even though recent fighting has forced a lot to escape.

Libyan hospitality was amazing and its people loved showing travelers around. However, tourism weakened after the Arab Spring and has been debilitated by the following Civil War. As of writing, tourist visas weren’t being issued and most tour agencies have closed their businesses – a lot of tour guides are now working as fixers for war reporters.

Nigeria is infamous for the poor level of security and safety within its borders, and it’s not surprising that even well-seasoned expatriates with years of experience in traveling skip this country as they’re worried about their personal safety in the country.

A lot of Western governments like the UK and US have issued warnings to their people to avoid traveling to Nigeria as much as possible because of safety concerns, mainly in the northern region because of dogmatic violence, and in the southern oil-producing states because of how active rebel groups are in that particular area.

While many parts of the country are dangerous, there are still regions that are relatively safe. The country’s capital, Abuja is probably the safest place in the country. Lagos, which is the commercial capital of Nigeria, houses most of the multinational companies in the country. Most oil and gas companies on top of all banks are based in Lagos.

Africa is a quite peaceful region, but other parts of Africa's most crowded countries can be more dangerous. Hopefully, this article has given you enough information about the most dangerous countries in Africa. If you have other questions about this topic, let us know in the comment below. Also, don’t forget to share this article with your friends on your social media account to keep them informed about this topic. For information about traveling, read more articles like this at ForTravelista.

Is Morocco Safe To Visit? Here Are All the Information You Must Know

9 Spectacular Places to Visit in Morocco