Weather In Italy In October: Should You Go? 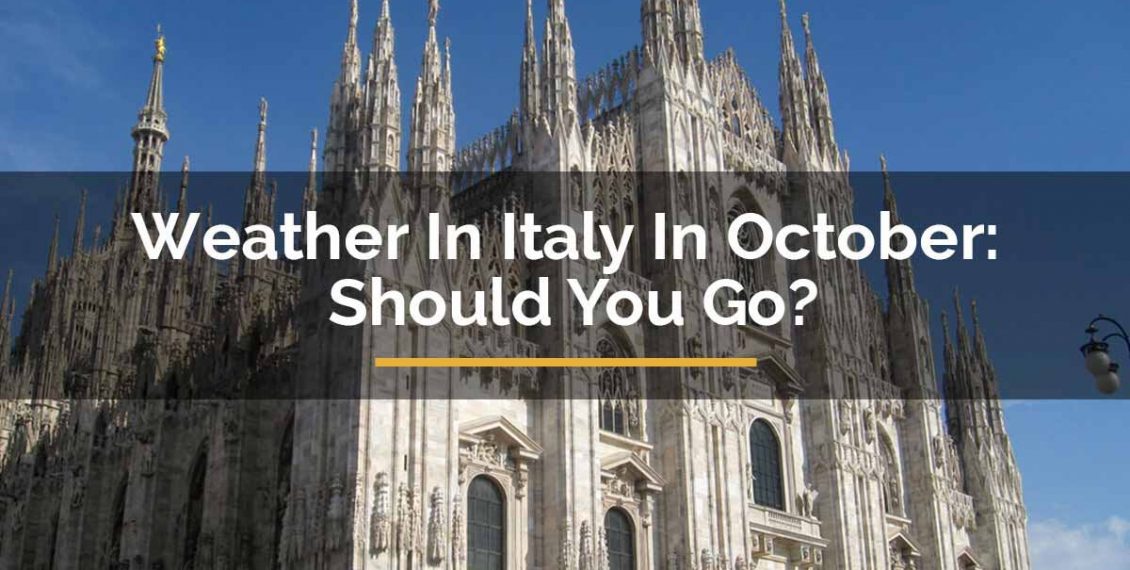 But what is the weather in Italy in October?

While the temperatures in September could still be quite warm and summery, the month of October normally brings in the real beginning of the fall season. October temperatures drop all over the country, and there is a higher probability of rain.

During this month, you are not likely to see some locals hanging out on the beaches as this month is too cold for them. But if you are planning to come from a colder country, warm days and nearly-empty beaches might excite you.

But as a smart traveler, make sure to always check the current weather forecast for the place you are planning to go, this can definitely save you from a lot of trouble – from where to go and what to pack.

The temperature in the northern part of Italy drops rapidly in October. In Milan and other parts of the region, the average temperatures play around 44°F to 64°F. There are a lot of wet days and evenings tend to be chilly.

Temperatures are colder during nighttime but you may want to expect for the daytime to be quite warm. They normally stay between 66°F to 74°F. Even in a Southern part of the country, however, you may expect some rainy days in October.

Rome is located in the southern part of Italy and provides a great idea of what the country’s weather is going to be for the most part. You will get an average level of 73°F in the month of October, which goes down to a colder level of 52°F at night which makes it nice and pleasing during the day but wearing warmer clothes at night would be pretty necessary.

The level of humility is low, while there is 38mm of rain for more than a week. You might expect about 11 hours of daylight with 6 hours of sunlight. Normally, the sun sets just before 7 PM at the beginning of October and closer to 5 PM as the month ends due to daylight saving.

The month of October is an ideal time to go to Rome when the leaves start turning to color red and there is a cool breeze.

During October, the temperature begins at around 66°F and slowly goes down until it reaches 57°F-59°F as the month reaches to its end, in comparison to November that has an average temperature of 50-59°F throughout the entire month.

Is It A Good Idea To Travel To Italy In October?

If you’re a foodie, then October could be the best time to visit Italy. But lucky for you, food is not going to be the only reason why you should visit the country at this time of the year.

Because the high season tends to last longer compared to the summer season, it is a good thing for budget travelers as soon as the high season comes to end as prices in Italy get cheaper, which normally takes place in October.

While it’s true that September is a good time to visit the country, waiting for October could save you a lot of money. The number of tourists starts to go down in October even though there is some holdover from the previous months, so it is not like you would not meet any tourists on the road.

But then again, you will find better deals like accommodations and airlines tickets to and around the country. There are regions where the high season lasts through autumn – these places include Umbria and Tuscany.

The weather in October is a little bit more unpredictable compared to the previous months, which is one of the reasons as to why it is considered as a shoulder season month. However, it’s not only about picking up an umbrella.

Stormy weather could mean strong seas, and strong seas could mean boats don’t operate. So, all in all, shoulder seasons could be considered as a reward for flexible travelers who plan their itinerary according to the weather.

Things to Do In Italy in October

Even though you might see more rain than in the summer months, at least you will be able to avoid the heavy flow of tourists and summer heat, try the delicious food at festivals through harvest time and revel in the feast days, along with other regional events.

Cities like Venice, Rome, and Florence could be pretty hot and congested during the summer season. When you visit Rome in October, you are easily able to stroll all over the Colosseum or wander the Spanish Steps peacefully before winter comes, and you are able to enjoy St. Mark’s Square in Venice more peacefully or get on a gondola for a ride on canals which are congested.

In Florence, a lot of the tourists have wiped out on the popular tourist streets, and the Uffizi Gallery is a great place to enjoy beautiful artworks if the rain stops you from wandering outdoors.

The harvest season attracts a range of food festivals all over the country. Produce like truffles, wine, and chocolate are widely available at local festivals like Perugia’s annual EuroChocolate event. Other well-known fairs are the Alba White Truffle Festival in the area of Piedmont. There are also other activities in Italy that get going in October, with both the soccer and opera seasons beginning.

Not too far from Venice, the region of Veneto hosts a lot of events every October. In Conegliano, the first Saturday of October is where you can experience the traditional Fiaccole e Tamburi festival where locals thrust a big float to the castle. You will also see the city all lit up by torchlight.

An annual Rome Film Festival is another thing to look forward to when you visit in the city in October. This event has started in 2006 and famous celebrities like Martin Scorsese, Meryl Streep, and Robert de Niro have attended. A lot of international premiere events are screened all over the city on sites, such as the Via Veneto and Auditorium Parco Della Musica.

This event is becoming more and more popular with up to 600,000 attendees annually. Enjoy the festival atmosphere, watch a film, and try and see the celebrities as they make a public appearance.

Again, the month of October is the fall shoulder season in the country. If you are traveling on a shoestring, you can take advantage of cheaper accommodation, airfare, and even sometimes activities such as walking tours. However, attractions do not normally have off-season prices.

In addition to the people who visit these festivals, there’s normally an obvious drop-off in the number of people who visit Italian shores throughout the summertime. However, don’t expect the main attractions like the Colosseum to be empty as they never will but the queues are shorter.

If you are visiting Italy in hope to find some sunshine, then you are going to be disappointed as the country is most likely to be cold in the evening and rain is inevitable. However, while the weather in Italy in October is not the most pleasant, it doesn’t change the fact that it’s still a good time to go.

Hopefully, this article has been helpful enough in helping you make a decision as to whether or not you should go in that time of the year.

If you find this helpful, make sure to share this article with your friends on your social media. On the other hand, if you have any other questions about this topic, don’t hesitate to help us know in the comment below!

When in Rome: a Guide to Events and Must-See Destinations

Must-See Spots and Things to Do in Côte d’Azur

Top Sights and Activities for a Marvelous Weekend Getaway to Milan