8 Exciting Things to Do In Chiang Mai 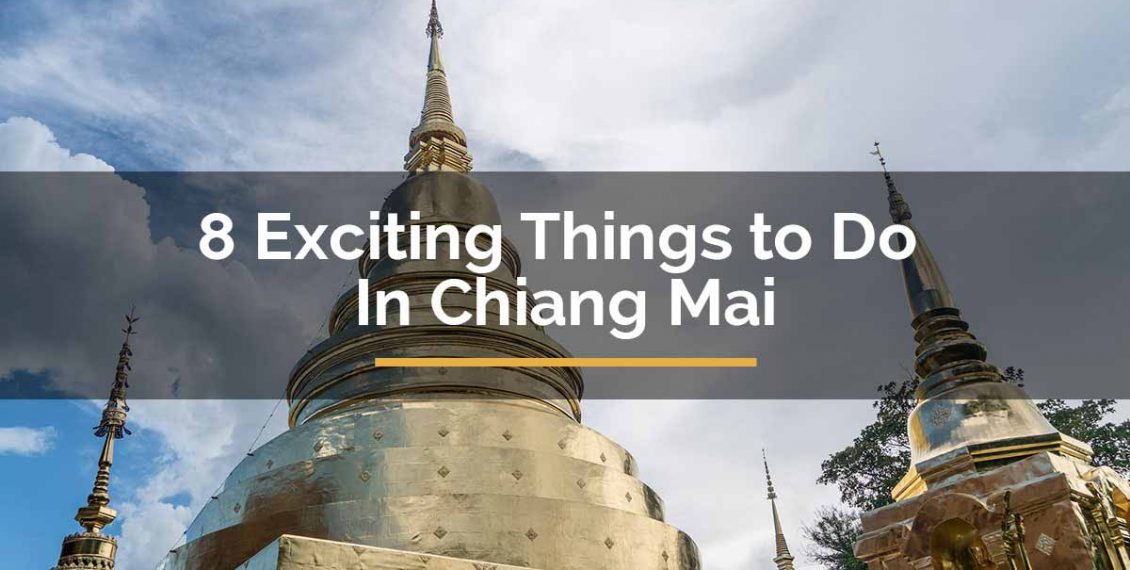 Chiang Mai, the second-largest city in Thailand and the ancient capital of the Lanna Kingdom, is well-known for its beautiful setting at the foot of lush mountains, laid-back vibe, and rich cultural and historical heritage. Positioned on an amazing plain at the height of 316 meters, it’s more calm and green compared to Thailand’s Capital, Bangkok. So, it’s not surprising that there are a lot of things to do in Chiang Mai.

8 Exciting Things to Do In Chiang Mai
Getting Here
Getting Around
Climate
Festivals
Accommodation
Things to Do in Chiang Mai
1. Meet the Elephants
2. Visit the Temples
3. Check Out Doi Inthanon National Park
4. Try Northern Cuisines
5. ​Night Market
6. Enroll in a Cooking Class
7. Chiang Mai Night Safari
8. Meet the People at the Long Neck Village

If you want to get there the most convenient way possible, you’d be happy to know that there’s an airplane in Chiang Mai. If you are traveling on a budget, it’s not hard to find bus services the run from the Northern Bus Terminal in Bangkok that goes to Chiang Mai. If you prefer, there is also a train route to get there.

An unusual way of getting around the city is through the seelor or songthaew. Samlor and tuk-tuks are great practical alternatives for exploring Chiang Mai. However, there are also options such as bus, modern taxi, cars, and bicycle.

Because the location of Chiang Mai is surrounded by mountains, the climate here is extremely different from other parts of the country. Winter season normally lasts from the latter part of October up to the late part of September. The coldest months of the year are December and January. It begins raining usually from the early part of July until the end of October.

Chiang Mai Flowers Festival takes place annually on the first weekend of the month of February. The glistening and vibrant colors that get exhibited during that time are just beyond compare. For those who love flowers, this would be a perfect time to go. Another famous festival here is Loi Krathong Festival where people set fire lantern.

One of the best things about traveling to Thailand is that the accommodation is relatively cheap, and Chiang Mai is not an exception. You are able to pick one that’s tailored to fit your needs correctly. From budget to mid-range and luxury accommodations, there is always one that suits your needs and budget.

Things to Do in Chiang Mai

One of the most famous attractions in Thailand is the number of elephants that live there, and more, you can even play with them. There are a lot of sanctuaries in Chiang Mai that don’t abuse these gentle giants and not allow people to ride them for money. You can feed them bananas or bathe with them or both, but not ride them.

There are more than 200 temples or wats dotted all over Chiang Mai that makes it a great place to begin a trip to your inner self, keep you in the way to enlightenment, or if you simply want to see the wonders they can offer.

However, you have to keep in mind that these are locations for active worshipers, so ensure that you have the highest respect for locals during your visit. One of the best ways to show respect is to keep quiet and dress appropriately.

Doi Inthanon National Park is where you can find the highest mountain in the whole country, an extension to the Shan Hills in Myanmar which is made mostly from granite. This national park covers a land mass total of 48,240 hectares. The peak of the mountain measures 2565 meters tall, while going to the park you can’t help but see the beautiful birds flying around or hanging around the branches. Doi Inthanon is also known to be a home to many different species of bird than any place in Thailand.

Northern Thailand is well-known for a lot of things but its greatest export certainly has to be Khao Soi. It’s a coconut milk and a curry flavored soup full of chicken and yellow egg noodles, placed on top of this soup are crunchy fried egg noodles which give a real combination of textures to the delicacies. To go with it, you will have chopped onions, cured mustard, and slices of lime. But of course, that’s not the only thing you should try.

6. Enroll in a Cooking Class

If you want to get on to the next level on your Thai food, one of the best things to do in Chiang Mai is to join a cooking class during your trip. Thai food is known to be one of the best foods in the world. It is difficult to find such a far-fetched balance of spicy, sweet, and salty in a dish, which Thai people are good with when making food.

However, one of the most surprising things about this is how easy most Thai dishes are to prepare. Most delicacies can be easily prepared without too much hassle or preparation. There are many cooking class schools all over Chiang Mai, and it’s definitely one of the fun things to do in Chiang Mai. Another good thing about joining classes is that you are the one who will shop for ingredients in the local market, which means you will have a real feel of the local life.

Built after a similar attraction in Singapore, Chiang Mai Night Safari offers three animal areas –Predator Prowl, Savanna Safari, and Jaguar Trail – that you are able to explore by riding the open-sided tram or on by walking. You may enjoy a variety of activities intended to keep you amused during your visit, from wild animals you can feed and tiger cubs you can pet to dancing fountain as well as a laser light show.

8. Meet the People at the Long Neck Village

The Chiang Dao cave stretches a lot of kilometers into the mountain yet just a little portion of the complex can be explored. The two of the caves you will find here are Tham Seua Dao and Tham Phra Nawn, are floodlit with electric lights, however, the caves on the bottom part are pitch-black and you will need to have a local lantern-carrying guide who will lead you the way. You will also find remarkable Buddhist shrines as well as limestone formations in these caves.

These are only eight of our favorite things to do in Chiang Mai, we are pretty sure there are a lot more that we fail to mention, however, these things listed above will definitely not let you down throughout your trip.

So, do you have other favorite things to do in Chiang Mai? We want to hear what you think. Let us know in the comment below!