Do People Speak English in Thailand? Let’s Find Out! 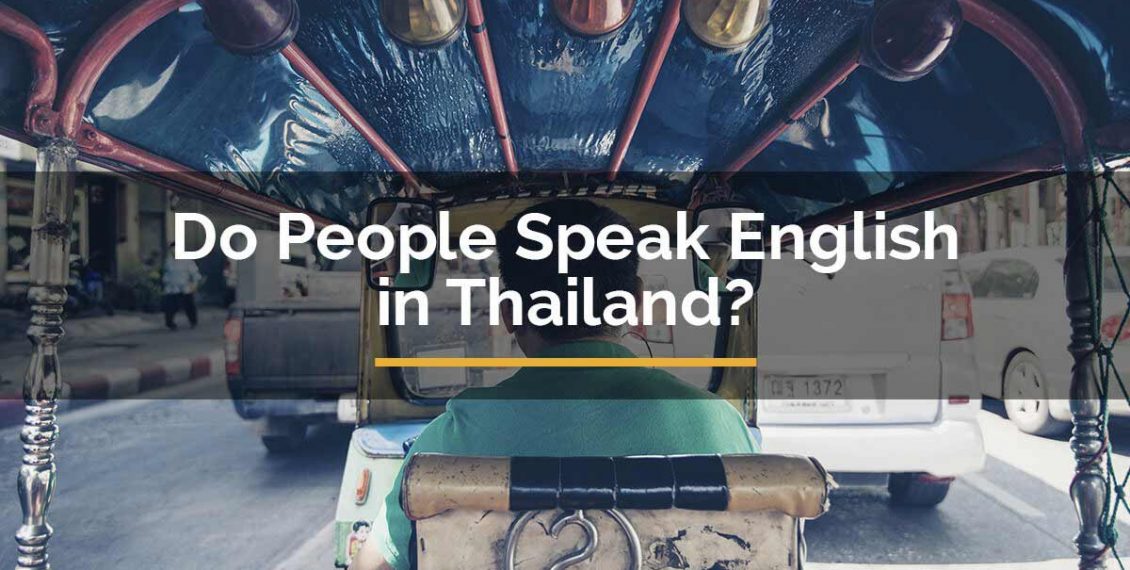 If you're considering a trip to the Land of Smiles, you may be wondering, "Do people speak English in Thailand?". As most people who visit Thailand can only speak a little or no Thai at all, the communication between Thai people and foreigners usually has to happen in English. And although a lot of Thais can speak a bit of English, understanding them or trying to make sure they understand you can nevertheless still be a bit of a challenge.

One of the main reasons for this is that Thai people usually translate Thai phrases into English very literally - particularly those who have had limited access to education and haven't studied the language formally. In addition, English words are also pronounced in a distinctive way in Thai.

In general, the pronunciation is a bigger barrier to understanding than the grammar. It is often possible to figure out the meaning even if there are mistakes or if the words are in the wrong order, but identifying the words that are spoken can be trickier.

Many tourists visiting Thailand, especially those who are not staying in the country for too long, just abandon the idea of learning the local language and decide to rely on English. However, how well do people speak English in Thailand? Will you be able to communicate? Let's find out…

Even though the English language is taught in some schools in Thailand, most locals don't have a lot of opportunities to practice foreign languages unless they study abroad. Perhaps reading and writing are easier, but speaking the language is not as simple.

In the 1960s, it became more common for Thai people to learn the English language, as the number of foreign visitors grew. In particular, there was an influx from the American Military, which was based in Vietnam and used neighboring Thailand as their R&R base.

Since then, English learning has been continually boosted, as the country has become a famous destination for travelers looking for an affordable place to vacation. Another important factor is the rising number of expats deciding to live in the country.

English is now widely spoken in the capital city, Bangkok, as well as in other tourist destinations in the country. However, some locals' English remains quite rudimentary and you may find that understanding the words is not always simple.

In Thai schools, exposure to the English language is variable at best. Therefore, unless parents can afford to send their children to expensive schools or on study abroad programs, it's more likely for locals not to develop great English oral skills. While there might be some English taught in Thai public schools, it's usually not an essential part of the curriculum. Therefore, children may be able to say some words and phrases, but in some cases they might not even actually understand what they mean.

The further the place is from major cities such as Bangkok, Phuket, or Chiang Mai, the lesser the exposure to English. The net outcome is extremely poor English skills on the whole, although English is more common among the middle classes. The issue is worsened by teachers giving students passing grades regardless of their actual scores.

The staff of hotels and restaurants in most major tourist destinations will almost always have acceptable English speaking skills. In those areas, signs and menus are routinely translated into English, although they may contain some - often charmingly amusing - errors.

On the other hand, if you go to more rural parts of Thailand, your chance of encountering people who speak English is greatly reduced. Even if the language is spoken, you will still have to focus on trying to understand the pronunciation, grammar, and sentence structure, as Thai people can have trouble pronouncing English correctly.

When a shop keeper or street vendor has to tell you the right price for a product they are selling, don't be surprised if they choose to type the amount into a calculator and then show it to you rather than speak it out loud.

In the business field, you will more commonly find Thai people speaking to each other in English. This is particularly true among educated locals. Understandably, those with good English like to show off their skills, since for most of them, being able to speak English is a symbol of status and intelligence.

There has been a growth in English language media in Thailand in the past few years, and it continues to rise. There are many English magazines and newspapers circulating around the country, which includes big mainstream publications like The Nation and The Bangkok Post newspaper. Actually, even Thai language periodicals will normally have headlines written in English.

Likewise, if you're wondering if you'll be able to catch a movie on your holiday, don't worry. Nowadays, cinemas in big cities and popular tourist destinations give you the option to watch English-language movies in the original with Thai subtitles.

Tips to Communicate in English in Thailand

Don't let the occasional language barrier stop you from connecting with the locals! Thai people are some of the friendliest and smiliest people in the world, and will usually do their best to communicate with you even if their English is not perfect.

Here are a few tips that will help to make your life easier when conversing with your Thai hosts:

So, the answer to the question "Do people speak English in Thailand?" is yes, and no. It is very easy to survive in Bangkok and other tourist spots even if you don't speak Thai. However, if you try to wander off-the-beaten-path and venture into more remote areas that don't receive a lot of foreign visitors, you'll likely have some trouble getting by if you don't have a phrase book.

We recommend carrying the Berlitz Thai Phrasebook and Dictionary with you! It's been our trusty travel companion on our extensive trips in Thailand. With its clear and compact, pocket-sized format, it's easy to use and even comes with free access to the Berlitz app. It contains everything you need to know to understand others and make yourself understood when you're out and about in Thailand!

Buy it on Amazon now

There are a lot of foreigners living in Thailand. A lot of them try learning the local language, and a lot of them are disappointed, as it turns out to be a very difficult language to learn. So don't worry if you've been struggling with it: you're not alone!

Although being able to speak Thai when visiting Thailand would be a lot easier for you, you will certainly be fine relying on English as a foreigner in Thailand. Just make sure that you have a phrase book with you if you are planning to go to less touristy parts of the country.

Read more:
Phuket or Koh Samui? Where should you spend your Thailand holiday?
8 Exciting Things to Do In Chiang Mai

Have you been to Thailand before? What has your experience of speaking English during your stay been like? Make sure to share your thoughts in a comment below!