How to Travel From Rome to Amalfi Coast? Here Are Important Things You Need To Know! 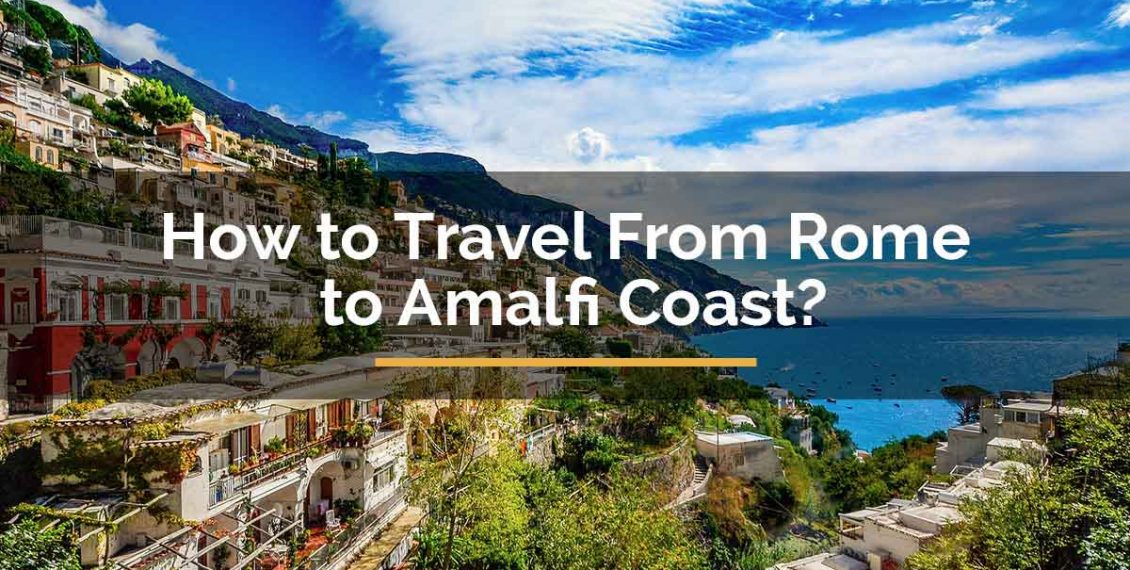 Want to know how to get from Rome to Amalfi Coast? Traveling to this spectacular stretch of coastline in Italy can seem intimidating if you don’t have a car. Luckily, however, there are public transport options you can use in order to reach the gorgeous town of Amalfi coast from the city of Rome.

How to Travel From Rome to Amalfi Coast?
Taking the Bus
Taking the Train
What Train To Hop On?
Other Ways to Reach Amalfi Coast from Different Points

The Amalfi Coast is the coastline that goes for approximately 80 kilometers from Vietri Sul Mare going to Positano on the southern side of the Sorrento Peninsula, close to Naples, located in Southern Italy.

Most of the time when travelers go to this part of the country, they combine Amalfi with Sorrento, and because the two are completely different even though they are very close to each other, there are obvious reasons why you, too, should consider taking this route. Sorrento faces the Gulf of Naples, on the right side of the Vesuvius Volcano, while the Amalfi Coast is covered by the Monti Lattari and faces the south in the direction of the natural reserve of Cilento.

The coastline and the sea are so, considerably different between Sorrento and Amalfi Coast: Sorrento has extremely steep cliffs, and only a few beaches, while the areas of Amalfi all the way to Vietri sul Mare, there are a lot of beaches of different kinds. Every town has at least one beach, some could be reached by traveling by land and tend to be a little crowded during the summertime, but others are only reachable from the sea and are extremely isolated even on busy days of August.

During the summer (the start of the month of June through the latter part of September,) a bus route operates to Positano and Praiano from Tiburtina train station in Rome. The bus starts running at 7 in the morning from the bus station, situated not far from the Tiburtina station in Rome. Just don’t confuse it with the ATAC bus stops just located outside of Tiburtina train station. It arrives Positano at 11:30 AM and Praiano at 11:45 AM. When you take Marozzi Bus Journeys, you are able to take the bus straight to Positano, but if you have enough time to explore, you can also make a stop in Pompeii.

Since there is no direct train that goes from Rome to Amalfi Coast, you will need to ride a bus on the latter part of your journey. Unlike other parts of Europe, traveling by train would be the cheapest way to travel the country. There’s a catch, though: If you are taking a train while it is rush hour, expect it to be pretty crowded and you might have a problem looking for a seat, so make sure to plan accordingly.

When taking this route, first you have to ride a Trenitalia train from the main train station of Rome, Roma Termini, going to the main station in Naples, Napoli Centrale. Trains go straight between the two stations, even though some slow trains need a change.

At Napoli Centrale, you will get off a train for Vietri sul Mare, a station where you are able to get on a local bus that goes to Amalfi Coast as well as other towns in the province of Salerno.

Don’t forget to check schedules and the prices of tickets on the Trenitalia website or choose train ticket prices page where you are also able to buy tickets online in advance.

What Train To Hop On?

Not all Italian cities are served by Trenitalia train line, however, Rome, Vietri sul Mare, and Naples are. There are trains that are faster but of course, more expensive compared to others, so depending on your preference, choose one that suits your needs and preference.

The most expensive option would be Frecciargento high-speed train, but it offers first-class and second-class compartments as well as a bar. The Regionale are local trains that are set on a schedule of commuters. They’re cheap and reliable, however, they get crowded at rush hours. There’s not normally a first-class choice on regional trains, however, it is worth asking if there is an upgrade available if you are willing to add more money.

Other Ways to Reach Amalfi Coast from Different Points

There are a lot of other ways to reach the Amalfi Coast, which is located in the northern part of Sorrento. Choosing where your starting point is to get to Amalfi Coast, of course, depends on the form of transport you want to use in exploring Italy, along with the things you want to see in Amalfi Coast, and how long you are planning to stay.

The nearest airports are the ones that are located in Capodichino, Naples, and Costa d'Amalfi. Flying would be a great choice if you want to be comfortable in traveling Italy. After stopping at Venice, or anywhere in the north of Italy, you can choose from any of the two flights a day from Milan Malpensa going to Salerno, and when you get there, Amalfi Coast is only a few kilometers away.

On the other hand, Capodichino Airport that is located in Naples serves a lot more destinations all over Europe and other parts of the and is also only one hour away from the Coast. Last, of all, there’s an airport in Rome called Fiumicino, which is the biggest hub in the country and is only 3 hours away from the Coast. In a situation like this, it is great to consider catching a train from Fiumicino going to Rome and then going to Naples that may take from 1 hour to 3 hours with a great range of prices, which lets everyone to modify the trip to their necessities. Furthermore, it’s a great time to take a quick stop in Rome before you go to Amalfi Coast! As you might already know, from Naples, there are several means to get to to the Coast by riding a train, then from there, you can ride a bus or rent a car.

During the summer, there’s also a sea taxi service that connects Naples, Positano, and Amalfi together. Taking this option is as simple as taking the local train, but even though it is slightly more expensive, it’s certainly more enjoyable and comfortable. Certainly, the city line from Naples going to Sorrento can be expected to be either extremely crowded with Neapolitan travelers or with commuters trying to get to their destination. In case you still have time and budget and still looking for some more adventure in Italy, you can to the south part of the country.

Top 7 places to visit in France