How Many Countries Are in Southeast Asia? Let’s Take a Look! 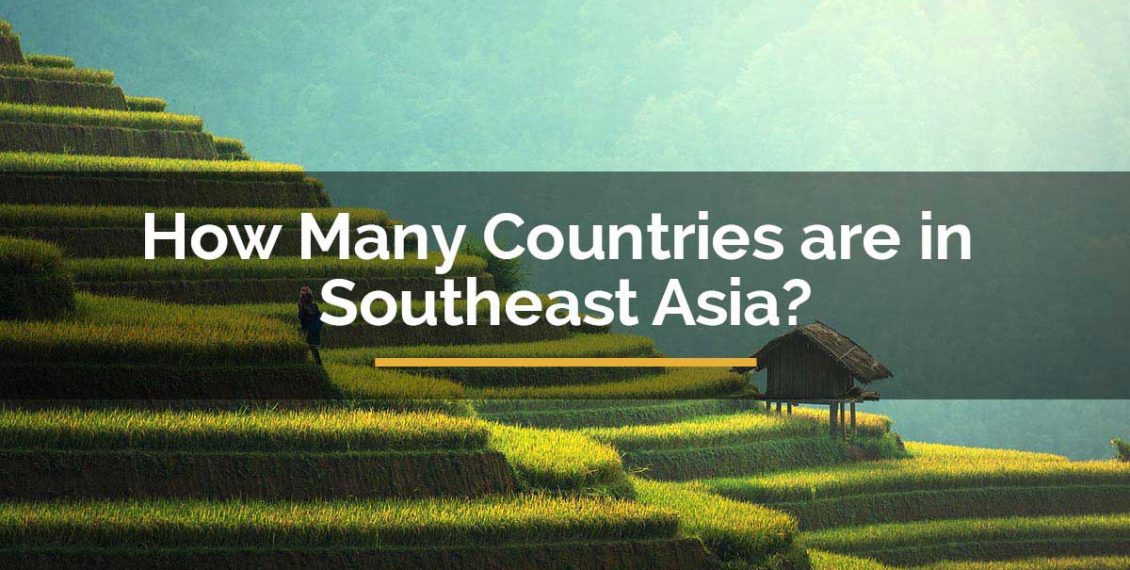 If there is one way to describe Southeast Asia succinctly, it could be, "The past meets the future." This part of Asia is home to some of the best tourist destinations in the world. But you may be wondering, how many countries are in Southeast Asia? Well, there are 11 of them! Check out our list below to find out they all are and get to know each of them.

Brunei Darussalam is a Southeast Asian country located on Borneo Island, whose territory it shares with part of Malaysia. This tiny country is known for its biodiverse rainforest, which is mostly protected within reserves, and its beaches.

Meanwhile, the capital is home to some interesting museums and some of the world's most ornate mosques. It also houses the residence of the Sultan of Brunei (the huge Istana Nurul Iman palace), who happens to be the richest man in the world today.

Cambodia is a popular country on the Southeast Asian tourist and backpacking trails. Most visitors come to see its star attraction, the famous Angkor Wat. This Buddhist temple complex is considered one of the 7 New Wonders of the World and is best admired at sunrise or sunset.

Beyond this gem, Cambodia is a captivating country with a rich mix of cultures and history (some of it unfortunately heartbreaking, as you can witness when visiting the Killing Fields), friendly people, and relaxed islands and beaches.

Often forgotten when trying to work out how many countries are in Southeast Asia, East Timor is a group of islands located in the Pacific Ocean that includes part of the Timor islands in Indonesia. It is located not very far from Darwin in Australia, and its population is mostly made up of Indonesians.

The country only opened up to tourism recently and remains difficult to access, being served only by a few expensive flights. As a result, it does not receive many visitors. It is distinguished however by its lush sandalwood forests and has also been growing as a prized destination for scuba-divers due to the rich diversity of its marine life.

With 17,508 islands, you will surely not run out of places to go when in Indonesia. The country shares borders with Papua New Guinea, Malaysia, and East Timor, and other neighboring countries include Singapore, Philippines, and Australia. As a huge country, it is not surprising to find many ethnic groups that speak different languages on this archipelago. However, the Javanese are the largest and administratively dominant ethnic group.
​
Between the luxurious beaches and resorts of Bali or Lombok, the incredible archaeological site of Borobudur, the country's many world-class diving sites, the countless volcanoes to climb, and the unique opportunities to encounter wildlife like orang-utans and Komodo dragons, Indonesia is an exciting destination for both adventure and relaxation seekers.

Laos is perfect for travelers looking for a laid-back vacation and those who love the idea of slowing down and spending more time in nature. There is no better way to sum up this country than with its own tourism slogan: "Simply Beautiful."

Unlike most countries in Southeast Asia, there is no coastline and no beach in Laos. However, it is famous for its lush jungle and its many exciting activities. And if you're looking for some time by the water, you can still find it in Luang Prabang, a charming city on the Mekong River, as well as at the wondrous Kuang Si waterfalls, or on the 4,000 Islands in the south of the country.

One of the most-visited countries in the region, Malaysia is not only famous for its white sandy beaches and remarkable forest wildlife. More and more people choose to go to this amazing country for its wonderful oceans that offer great diving spots for many scuba enthusiasts from different parts of the world.
​
Its capital, Kuala Lumpur, serves as one of the main travelling hubs in Southeast Asia and is a fascinating place in itself as a melting pot of cultures and cuisines. The tea plantations of the Cameron Highlands, the beautiful islands of the Perhentians, Penang, and Langkawi, and the tall peak of Mount Kinabalu are just a few of the country's highlights.

Having only reopened to tourists recently after years of relative isolation, Myanmar (formerly known as Burma) remains a bit of a time capsule and a slightly more off-the-beaten-path destination. It is worth visiting for the rich cultures of the 100 ethnic groups that make up the nation, the warmth and friendliness of its people, its distinctive customs and cuisine, and its gorgeous sites and landscapes, many of which are still untouched.
​
From the markets and colonial architecture of the biggest city, Yangon, to the world-class archaeological site of Bagan and the unique floating villages of Inle Lake, Myanmar is an exciting country for backpackers and adventurers to discover. Food specialties like tea leaf salad and Shan noodles should not be missed!

Offering some of the best beaches in the world, the Philippines has gone a long way from being under western colonial rule to claiming its independence, and later becoming a popular Southeast Asian destination with a flourishing trade, commerce, and industry. Its rich history and heritage has left it with a fascinating mix of Asian, American, and Spanish influences.

Today, the archipelago of the Philippines is known as a paradise for tourists for its magnificent blue seas, its lively festivities, its vivid golfing destinations, its gorgeous wildlife, and most of all, its thrilling variety of water sports that range from scuba diving and snorkeling to sea kayaking and white-water rafting. It's also known for having some of the friendliest people in the world, so you can expect a warm welcome when you visit this tropical heaven.

Home to a very modern and busy airport, the city-state of Singapore is another big hub for the region. Due to its tiny size, it could be easy to overlook Singapore when counting how many countries are in Southeast Asia. But as the richest economy of the area, this small country attracts not only foreign travelers (including many business travelers), but also expats who choose to work and live there. Despite its limited territory, Singapore offers a great selection of adventure and entertainment, and an eclectic mix of Indian, Chinese, Malaysian, and Western cultures.

From the iconic, boat-shaped Marina Bay Sands hotel, to the forward-thinking and environmentally-friendly Gardens by the Bay with its forest of Supertrees, Singapore houses innovative attractions as well as natural beaches and parks. There is some history to be found in areas like Chinatown and Little India, and Singapore also has an entire island dedicated to fun: Sentosa Island, which even contains the Universal Studios Singapore theme park. If you decide to visit, make sure to have a good budget, as Singapore is pricier than other Southeast Asian countries.

There is no doubt that Thailand is one of the most visited countries - not only in Asia, but in the world. As its nickname suggests, The Land of Smiles is home to some of the smiliest people in the world, and its very flavorful cuisine is often celebrated as one of the best on the planet. Some of the incredible dishes coming from Thai kitchens include famous pad thai, green, red, Massaman, and Panang curries, papaya salad, mango and sticky rice for dessert, and countless more.
​
It's not just the food and people that draw people to Thailand. The great weather, stunning temples, peaceful Buddhist culture, and lush nature - from the green mountains and countryside of the north to the picture-perfect islands and beaches of the south -, and excitement of Bangkok​ all contribute to Thailand's quality of life and popularity as a top travel destination.

Last in alphabetical order, but definitely not least, comes Vietnam. The bustle and diversity of this beautiful country are perfectly reflected in the captivating organized chaos of its two most populated cities: vibrant Hanoi (the capital) in the north, and Ho Chi Minh City in the south. For adventurous souls, the wild beauty of Vietnam is perhaps best explored on a motorbike trip around the country.

Crossing the length of Vietnam allows visitors to take in a variety of breathtaking landscapes, such as the emerald waters and jutting limestone islands of Halong Bay, the green rice fields of Sapa, or the beaches of Phú Quốc and Da Nang. Vietnam also has fascinating historical sites, including the Imperial City of Hue or the Cu Chi Tunnels. Top this with colorful cuisine like the world-famous pho beef noodle soup, and fun, approachable people, and this is another Southeast Asian country to put on the bucket list!

If you were curious to find out how many countries are in Southeast Asia, hopefully, this article answered your question.

Which Southeast Asian country is your favorite and why? Let us know in a comment below!