7 Best Things to do in Manila You Shouldn’t Miss 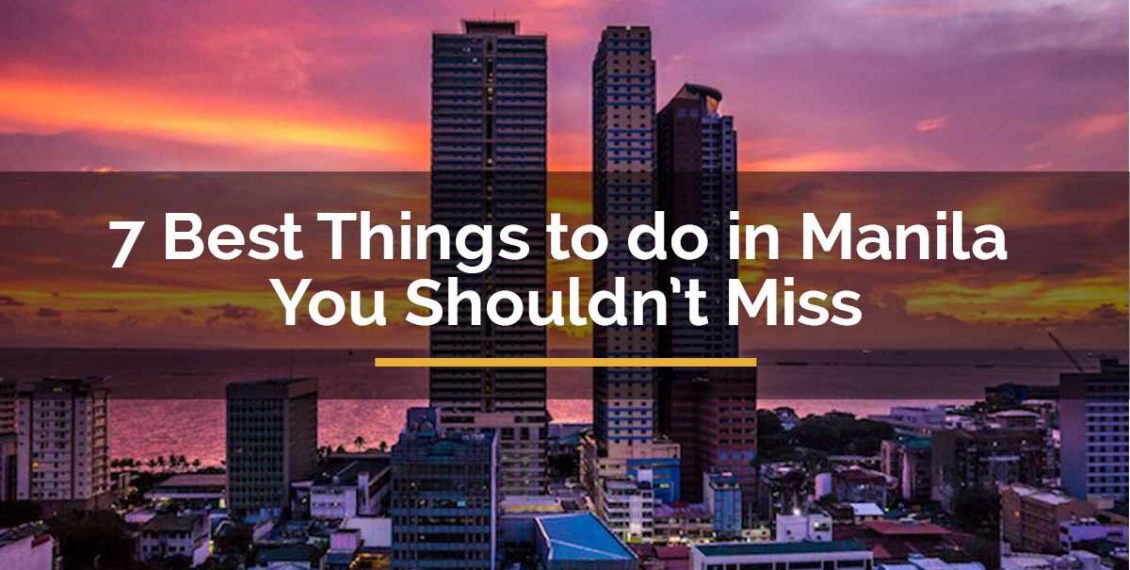 The Philippines’ capital, Manila, has become rather become infamous for pollution and constant heavy traffic. Just like most big cities in the world, it is crowded and busy and somewhat avoided by many travelers. However, most of those people who avoid this city are missing a lot. Manila is a city with an exhilarating nightlife, unique attractions, as well as an energy that can’t be matched with others. This city filled with rich culture and interesting history. You could never run out of things while here. Having an adventure here could always pop out from anywhere and anything. In this article, we will share with you the things to do in Manila during your trip.

7 Best Things to do in Manila You Shouldn’t Miss
1. Ride a Jeepney
2. Eat Your Heart Out in Binondo Chinatown
3. Explore Intramuros
4. Join the Smokey Tours
5. Learn the Country’s History at National Museum of the Philippines
6. Light up a Candle in Quiapo Church
7. Experience the Nightlife

Your manila trip wouldn’t be complete without riding the most iconic form of transportation of the Philippines, the jeepney. Jeepneys are US military jeeps converted to be public transportations. Many military jeeps were left in the country once the World War II ended. Now, they were upgraded to longer and passenger friendly. You pay the driver by handing your fare to another passenger closer to the driver, so if you happen to sit closer to the driver, collect the fare handed to you and give it to the driver. It’s normal for the driver to wait for the jeepney to fill in passenger before he starts running. so, sometimes, it may take some patience, but I’m telling you, riding one is a fun experience.

2. Eat Your Heart Out in Binondo Chinatown

Chinatown in Manila is the very first Chinatown outside China, so, that fact alone is enough reason why you should check this place out. Chinatown is where you will find some of the best restaurants in the city. Even though Chinese cuisine has gotten very popular all over the world, this part of the city is popular not just for its Chinese restaurants but also for its wide range of cuisines. From traditional family-owned eateries and small quaint cafes and luxurious new gourmet restaurants, Chinatown will surely offer something that will please any appetite.

Architecturally, Binondo Chinatown has changed almost nothing since the colonization of the Spaniards. Famous landmarks include the San Lorenzo Ruiz Plaza and the Binondo Church. The area of Chinatown is famous among the locals as somewhere you can find Chinese herbs, medicine, and unique ingredients that you can barely find anywhere else in the country.

During the 16th century, the Spaniards turned the city of Manila as their colonial capital because of its strategic location. Throughout supremacy, they built the 'Intramuros', which is translated to 'within the walls' in English. Erected along the southern part of the Pasig River the Intramuros was an imposing fortress of the history. The World War II carried about huge destruction upon the Intramuros, and at present, the fort is nearly entirely well-maintained for its historic significance.

Inside the facility, you can see the defense tower named Postigo Del Placioa; the ruins of Baluarte de San Diego; the palaces of the archbishop, and other charmingly built structures. At present, it functions as a museum for important artifacts, memorandum, and there is even a prison that was used throughout the period of the ruling of the Spanish. There are also free walking tours available on specific days. Make sure to ask about this at the ticket booth.

I just want to give a quick disclaimer: This is not for the fainted-heart. If you are an adventurous traveler who is looking for an opening experience, this is what you are looking for.

This tour gives you a chance to see the slums and meet the people who are making their living from rummaging through mountains of garbage to find things they can sell at recycling shops. You will also where they live and how do their daily life looks like.

There are more and more tourists, especially westerners choosing this kind of tours. This trend is part of an increasing global crusade of slum tourism, which is believed to show the truths behind poverty. There are at least 4 million people living in the slums of Manila, either in cemeteries, garbage dump, or shantytowns along the rivers or train routes.

There are Smokey Tours that run guided walks through the pits of these slums, which allow them to meet the people and learn about their lifestyle and daily life.

5. Learn the Country’s History at National Museum of the Philippines

Another thing you shouldn’t miss if you’re looking for things to do in Manila is to visit National Museum of the Philippines. This museum is dedicated to recording and preserving the country’s culture and history. As the main hub of all 15 branches, the National Museum of the Philippines makes huge influences to both natural history and cultural heritage of the country. This museum also serves as an implementation agency for the government, which specializes in perceiving cultural laws and keeping culturally substantial customs. Well-known art exhibits which date back from the 18th century are found here.

This government-established establishment has a massive collection of artifacts, ethnography, anthropology, archaeology, geology, as well as botany. One of the most famous works of Jual Luna, "Spoliarium," which won the grand prize at the 1884 Exposicion Nacional de Bellas Artes in Spain, is one of the highlights here.

6. Light up a Candle in Quiapo Church

This may sound like a mundane activity, but lighting a candle at the Quiapo Church is a lot more meaningful compared to other activities in Manila. The district of Quiapo is a melting pot of mysticism, religion, as well as business. When the bells of the grand Quiapo Church rings, people who want to practice their faith starts to gather, street vendors draw passersby to purchase a candle or two and light them inside the church to make some prayers of things you want to happen. Every color is supposed to come with a different effect. For instance, a pink candle is meant for finding a pure love. Black is meant to knock on a person’s conscience.

If there’s anything that you can describe Filipinos, one of them is that they know how to party. Combined with a nice sense of humor and hospitality, you will surely have fun while partying in the country’s capital. Just like in most parts of Asia, karaoke has a huge part in giving life to the party, so make sure you have your song ready. If you are looking for upscale restaurants, winery bars, craft beer bars, nightclubs, and American or European-style pubs are easily available in the city.

Malate and P. Burgos Street in Makati are two of the most popular party areas in Manila. I’d say that P. Burgos Street is comparable to Patpong of Bangkok, debauched and crazy but nevertheless very exciting place to spend an evening.

These are only seven of best things to do in Manila and the ones you should not miss! There are definitely a lot more we missed, but if you’re planning to visit the Philippines, give Manila a chance and see what many travelers visiting the country are missing.

What do you think of this list? Do you know any other activities in Manila deserved a spot here? Let For Travelista know in the comments below!

11 Most Instagrammable Places in Manila, Philippines

13 Top Things to Do in Sentosa Island, Singapore