How Big Is Puerto Rico? Here Is The Answer And More! 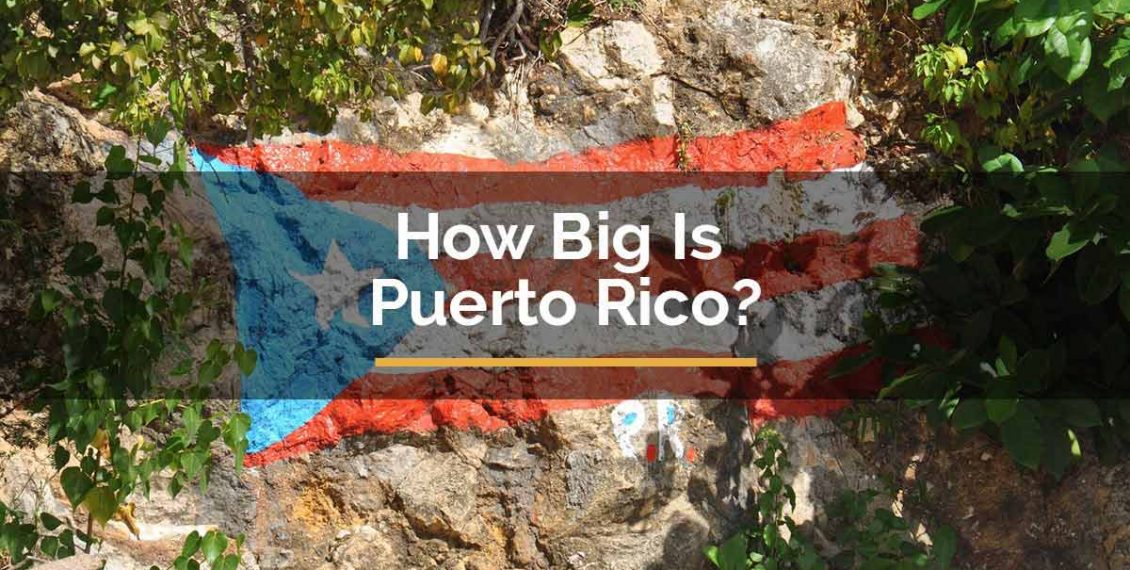 Puerto Rico spreads about 90 miles long from east to west, and around 30 miles wide from the south to north coasts. This Caribbean island is actually a US territory. If you’re asking yourself how big is Puerto Rico, imagine the size of Rhode Island, and multiply it by three.

The Size of Puerto Rico

Puerto Rico is an extremely popular destination for tourists due to its tropical setting, warm climate and atmosphere, rich culture, and interesting history. This island is located in the Caribbean, between the North Atlantic Ocean and the Caribbean Sea. It sits to the east of the Dominican Republic, approximately 1,000 miles southeast of Miami.

The shape of the island can be compared to a rectangle. It stretches over nearly 100 miles in length and is the smallest island among those that make up the Greater Antilles. Its coastline measures about 580 kilometers, rising to about 700 kilometers when including the neighboring islands of Culebra and Vieques.

Puerto Rico’s tropical coastal area is mostly flat, while the inland area features many mountains. One of the highest mountains on the island, called Cerro de Punta, is located in the middle of Puerto Rico and stands at 1,338 meters tall. Eight percent of Puerto Rico's surface consists of arable land that is suitable for growing crops, so the island has a rich agriculture.

Discover the highlights of Puerto Rico on our
favorite tours and activities!

It is believed that Christopher Columbus discovered the island and claimed it for Spain. Puerto Rico did not become settled until the year 1508, when Juan Ponce de Leon discovered a little town close to today’s San Juan. Subsequently, the island remained a Spanish colony for more than 4,000 years, until 1898, when the US beat Spain in the Spanish-American war.

Up to the middle of the 20th century, Puerto Rico was known as one of the Caribbean​’s poorest islands. From 1948, the United States government began to give the island greater freedom, allowing it to elect its own governor and eventually to adopt its own constitution in 1952. It also helped it develop a strong manufacturing industry and service sector, which filled Puerto Rico with millions of dollars and helped to establish it as one of the richest and strongest economies in the region.

Since 1917, Puerto Ricans have been considered US citizens. Between 1967 and 1998, a string of referendums were held for Puerto Ricans to decide whether the island should become a state of the United States, become its own fully independent country, or continue to enjoy an in-between status.

If the citizens of the island were to opt for independence in the future, then the US has pledged to help the country with a year-long transition. However, for now, Puerto Rico remains a US territory that is known as the Commonwealth of Puerto Rico.

Even though the island is still a territory of the US, Puerto Rico has upheld its status as a non-sovereign country since 1953. As proof of the unique status of the country, the people of Puerto Rico voted for the island to remain a Libre Asociado or an Associated Free State instead of becoming a state of the US on four different occasions.

The Climate of Puerto Rico

The island has a tropical marine climate, with an average temperature around 80°F. Puerto Rico enjoys sunny, warm days most of the year. When visiting in any season, make sure to pack some lightweight gear. Temperatures in the southern area are normally a little higher than in the north, while the mountainous center of the island usually experiences slightly cooler weather year-round.

The island of Puerto Rico is constantly visited by cyclones. Hurricanes often hit between the months of August and October, even though the US National Weather Service states that the storm season runs between June 1 and November 30 in the North Atlantic Basin. (The North Atlantic Basin consists of the Caribbean Sea, the Atlantic Ocean, and the Gulf of Mexico.)

The People of Puerto Rico

Another way to look at the question "How big is Puerto Rico?" is to consider its population size. The island is estimated to be home to approximately 4 million residents. The capital city of Puerto Rico is San Juan, which is located in the northern part of the island. The island has a very dense population, with approximately 1,100 inhabitants per square mile.

Hopefully, this article answered the question “How big is Puerto Rico?”. As you might know by now, Puerto Rico is not that big, although it has a pretty large and dense population. The island is almost the same size as Connecticut.

Do you have any more facts about Puerto Rico that ForTravelista failed to mention in this article? Have you been there or are you planning to go? Let us know in a comment below!

Breweries Downtown Chicago: The 6 Best To Visit On Your Trip

New York’s Central Park Has Something for Everyone