What Is The Best Time To Travel To Australia? You’ll Be Surprised to Know! 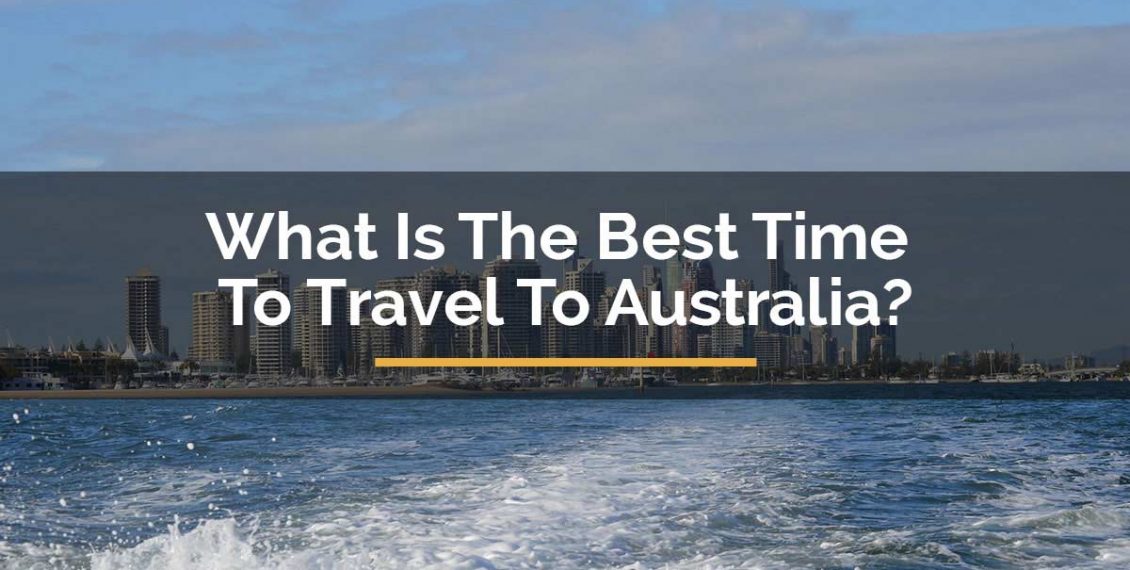 Australia has a mild climate, and some parts of the continents are good to visit any time of the year. When the northern hemisphere is experiencing winters, Australia enjoys summertime. Different from the northern hemisphere, the farther south you move in Australia, the colder the weather gets. The best time to travel to Australia is during the winter season. In many parts of the country, such as Top End, Red Centre, and Queensland, the best time to go would be from the month of April to the month of September.

What Is The Best Time To Travel To Australia?
Peak Season
Off Season
Things to Know Before You Go – What to Wear

Throughout these months, you may experience a temperature that ranges between 19°C and 31°C, and rainfall hardly occurs. On the other hand, the months of June to August are normally the busiest months in Australia, as that’s when the flow of tourists is at its heaviest.

If you’re not aware, you can experience midwinter season in Australia in the month of July and August, so this means the hottest time of the time in Australia (mainly northern Australia) would be from the months of November to March. So, if you’re looking for a sunny winter in December, this place would be perfect! Isn’t Australian weather weird?

As mentioned earlier, June to August is the peak season in Australia. In the northern strip of Australia, the temperature reaches that 15°C to 25°C and you will barely experience the rainy season. Due to these temperatures in the north, it has become the home to popular travel spots in Australia.

The southern strip is one of the best places to experience summertime in Australia. Some of the best places to go would be Western Australian, New South Wales, Perth, and Tasmania. However, make sure to prepare yourself for Australian weather as it gets really hot in the region. The average temperatures top 30°C throughout summer and 15 °C during the winter season. On the other hand, the highest maximum temperature in Victoria is 48.8 °C which was recorded in February 2009, during the south-eastern heat wave.

Personally, I think the best time to travel to Australia based on the climate would be in the month of September to the month of October. Due to the seasonal change, it still warm enough for tourists to enjoy the beaches and water activities while also having the chance to experience cooler temps that will allow travelers to visit Ayers Rock without being drowned by heavy rains and humidity.

Furthermore, by checking out Western Australia you are able to see thousands of types of wildflower in full bloom.

When traveling, we, of course, want to experience comfort throughout our trip. So, if you want to avoid discomfort during your Australian trip, then you may want to avoid booking your vacation from the months of October to March as those months tend to be very hot and humid. That’s why it’s not surprising that it’s also the low season in the region.

Throughout the northern regions, West Australia and the Top End are intolerable for foreign travelers who are not used to hot Australian climates. In a lot of parts within Australia, tour companies and attractions are likely to be closed. Many hotels and resorts drop their normal rates radically, so if you are looking to save money, then this would be your best chance, but of course, you must prepare yourself for the harsh weather during this time of the year.

Australia and the neighboring regions offer the seamless destination all year round when you are looking to have South Pacific vacations; just make sure to find the right place to go on the specific season you are planning to go.

Things to Know Before You Go – What to Wear

First of all, you have to consider what time of the year and which part of the country you are planning to travel. By doing this, you do not have to pack thick jackets when what you need it swimsuits! Make sure to fill your packing cubes with appropriate forms of clothing in order to make the most of your trip!

The Down Under is one of the best tourist destinations in the world, so knowing the best time to travel to Australia really important. This region has splendid climate and breathtaking natural beauty. The cities that lie within Australia are well-settled and developed.

Australia is known for having a subtropical climate, considered by warm or hot by many, however, the place could also be cold, so you have to make prior research before your trip. However, no matter what time of the year you decide to go, one thing is for sure… traveling to Australia would be fun and amazing and something you would cherish for eternity!

Read more: The Best Attractions and Experiences to Enjoy in Sydney

Hopefully, this article has helped you know the best time to travel to Australia and if there’s anything else you want to add, make sure to leave it in the comment box below and share this article with your friends!

10 Ways You Can Discover the Great Barrier Reef from Cairns

5 Inspiring Things to Do in Palm Cove, Australia

Best Wineries in Adelaide Hills to Satisfy Your Wine Craving

You really gave us a great idea of when is the best time to visit Australia. Thank you for sharing.

Thank you for reading!