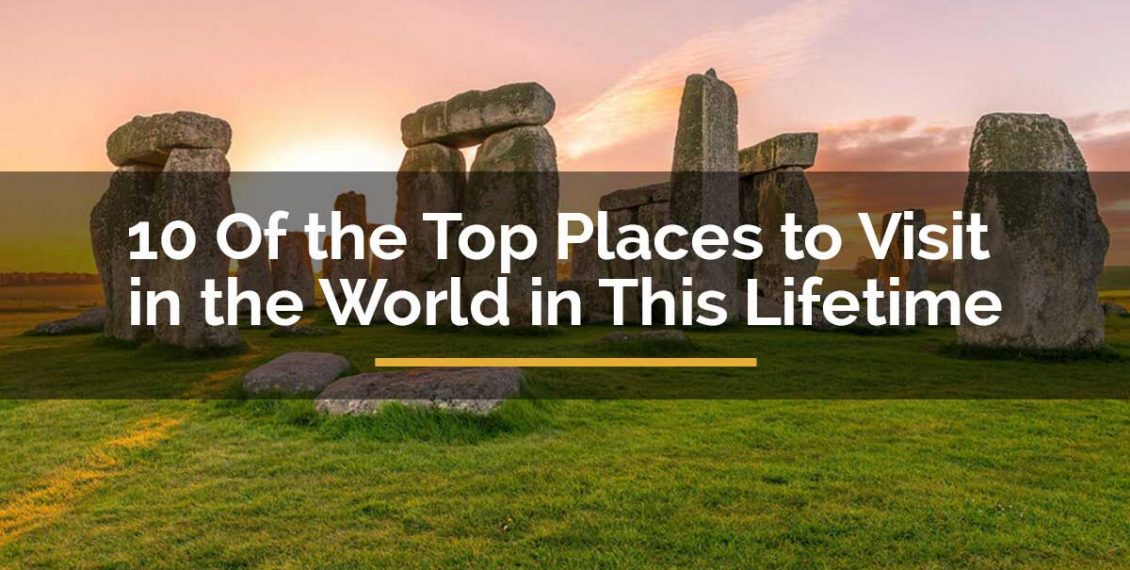 Earth is a wonderful place. If you let yourself out of your comfort zone and are willing to explore what it has to offer, you will be rewarded with spectacular sights, extraordinary experience, and unforgettable adventures that you will cherish for the rest of your life. But as you know, with 7 continents and 195 countries in the world, it’s almost impossible to see all of the wonders there are. So, to make it easier for you, here are some top places to visit in the world in this lifetime.

One of the Seven Wonders of the World, The Egyptian pyramids and the Sphinx are undoubtedly one of the top places to visit in the world. By visiting Giza, you are able to explore three different incredible pyramids: The Pyramid of Menkaura, the Great Pyramid of Khulu, and the Pyramid of Kafhre. All of these pyramids are a tomb of different rulers of the kingdom.

In front of the pyramids, you will be greeted by the mythical Sphinx, which is known as Abu-al-Hol in Arabic, which is literally translated to "father of terror". However, if you are visiting this place, make sure to plan ahead as it is swarmed by tourists.

Formed by a volcano eruption, Santorini in Greece is a circle-shaped Cycladic Island. This place has an unstable landscape, full of different rock formations, white villages, and golden sand beaches. Here, you can explore different ruins from Roman villages like ancient Roman theatres and baths.

Santorini is known for its cliff-side houses that are painted with white and bright blue. They have become an icon of the country. If you’re in search of a romantic getaway, then this place would not disappoint. Make sure to catch the sunset at Oia, and visit a lot of historical sites.

Situated in Salisbury Plain, Wiltshire in England, Stonehenge is one of the most beautiful and mysterious places you could find in the world.

This attraction draws millions of tourists annually. This is an old construction that includes a lot of structures from the Neolithic era. What makes the structures even more historically important is the fact that it has some remnants came from the Bronze Age as well. It’s believed that Stonehenge is constructed in 8000 BC. However, the reason as to why it was built remains unknown.

Voted the most beautiful island in the world multiple times by different travel magazines, Palawan is a slice of paradise. Swarming with exotic wildlife, picturesque fishing villages, and UNESCO World Heritage Sites, Palawan Island is truly one of the top places to visit in the world.

Some of the best spots to check out include the El Nido, Coron, and the capital Puerto Princesa. With the lavish jungles, caves, white sand beaches, dive sites, and pristine nature, Palawan is definitely one of the best places in the Philippines.

A deep, large deep water loch, Loch Ness, which is located on the Scottish Highlands, is another amazing place to visit in this lifetime. This loch extends for about 37 kilometers southwestern part of Inverness.

The name probably rings a bell; this is because Loch Ness is known for alleged sightings of the cryptozoological creature called the Loch Ness Monster, or for a less scary nickname, "Nessie". These extremely cold waters have been expansively explored in quest of Nessie. As a visitor, what you would only see is Nessie in cardboard cut-out displayed at Drumnadrochit's monster exhibits.

Loch Ness is the largest among the three lakes found in Great Glen. The size of the lake is considered big based on British standards. Not only Loch Ness attracts a lot of tourists every year because of the mysterious dinosaur-like monster, but also for its calm, majestic beauty

Home to colorful, diverse marine life, the Great Barrier Reef in Whitehaven beach, Australia gives you a chance to experience a great adventure of a lifetime. Get to see and experience the deluxe tropical islands like Lizard and Hayman. You can do island hopping or simply stay in one of the several coastal retreats like Hervey Bay, Cairns, Port Douglas, and Mission Beach.

With different aquatic species like clownfish and leatherback turtles, the Great Barrier Reef requires no introduction. The biggest coral reef system in the world composed of more than 2,900 reefs and 900 islands that stretch for more than 2,300 kilometers of the Great Barrier Reef can be seen from space and it’s the largest single structure in the world made by living organisms.

One of the natural wonders of the modern world, Iguazu Falls is a chain of mini waterfalls is one of the most breathtaking sights in the world. Visiting a breathtaking intuitive experience, and the noise and the power of the waterfalls – a chain of many waterfalls approximately 3 kilometers in extension – is something you would not be able to forget.

The falls lie divided between the countries of Argentina and Brazil in a big area of national park, much of it rainforest swarming with unique wildlife.

Salar de Uyuni in Bolivia is one of the most remarkable places not only in South America but also on Earth. Stretching over 4,000 square miles of the Altiplano, it’s the biggest salt flat in the world, remnants of ancient lakes evaporated many years ago. By coming here you will see a thick crust of salt stretches to the horizon, enclosed by quilted, multilateral salted patterns growing from the ground.

This place is definitely an Instagram-worth place as the neighboring lakes overflow and a layer of water turns the flats that create a giant mirror that impeccably reflects the sky. This gorgeous and out of this world terrain serves as a profitable extraction place for lithium and salt.

Found in the Namibian Namib-Naukluft National Park, Sossusvlei is a clay and salt pan bounded by huge red dunes. Sossusvlei, which translate to “dead-end marsh” in English, is located approximately 60 kilometers from the Atlantic Ocean coast. This is where the dunes break the Tsauchab River water from flowing any further.

The large red dunes are one of the biggest ones in the world and are reflected in a lake which lasts for less than a year. While a lot of living creatures got used to the harsh weather of Sossusvlei any time of the year, thousands of birds visit the swampy coast when the water starts coming in.

Victoria Falls, locally known as Mosi-oa-Tunya is a magnificent sight of unique majesty and beauty. The world’s biggest water curtain, this massive waterfall on the Zambezi River, located on the border of the countries Zimbabwe and Zambia. You can hear the sound of the water from 40 kilometers away, since the waters of the Zambezi River plunge on the brink of the wide basalt rock face into the wonderful ravine 100 meters below.

You can see the spray of the water from 50 kilometers away as it goes 400 meters up to the air, which creates clouds and boundless rainbows. Throughout the falls you will see a basalt wall covered with thick jungle, which offers wonderful sights of the main falls and several nonstop falls as the water meanders through the ravines.

What listed above are only 10 of the top places to visit in the world, there surely are more to be added here. What places do you think deserve a spot in this list? Let us know by leaving a comment in the box below. If you find this article helpful, make sure to share it with your friends on social media.

The Best Spiritual Retreats for 2023