Do Kids Need A Passport To Go To Mexico? Find Out the Answer! 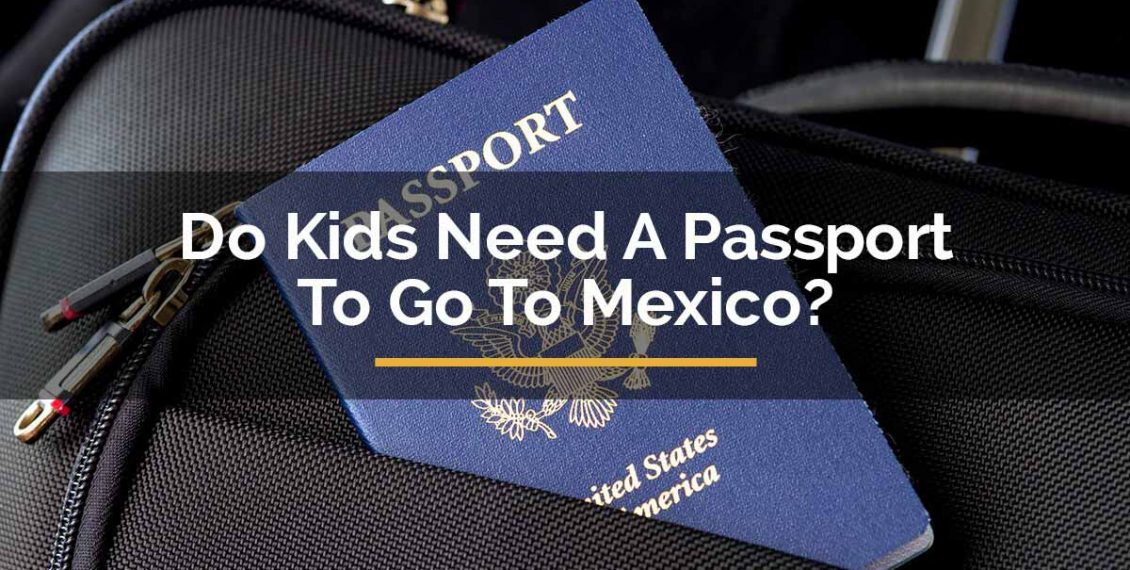 All travelers entering Mexico are required to carry a passport. However, do kids need a passport to go to Mexico? Years ago, if you wanted to go to Mexico as an American citizen, all you needed was an authenticated piece of paper saying "I am an American citizen" to be able to enter the country. Those days are gone, though. Below are the new rules you have to follow to gain access to the Land of Enchantment.

There has been a lot of concern made when the changes in identification requirements were declared as it will affect Mexico's tourism industry. Passport for has been required for U.S. citizen since the early part of 2007 if they're arriving in the country by plane. Fortunately, the negative effects on the last decade have been minimal.

If you're not new to international travels, you know that passport is something necessary to enter a foreign country. This is a powerful identification tool that is recognized all over the world. Getting a passport is not difficult at all.

For US citizens, the application could be obtained straight from the website of U.S. Department of State. There are a lot of government offices all over the country that accept the passport applications. The process normally takes four to six weeks. If you need the passport in an urgent, you can speed up the process by paying an additional fee.

Along with regular passports, a new passport card has also been made. This is a cheaper option which allows U.S. citizens to enter Mexico, Canada, Bermuda, and the Caribbean when traveling by water or land. The passport cards application process takes about 3 weeks and it is cheaper than a regular passport book.

U.S. citizen kids below the age of 16 entering Mexico by sea or land from neighboring territory might also require showing a copy of his or her original birth certificate, a Naturalization Certificate, a Consular Report of Birth Abroad, or a Citizenship Card. A passport is only necessary for a minor U.S. citizen when they are traveling by plane.

How to Get Passport for Kids

The laws about obtaining a passport for kids are surprisingly more complicated than getting one for adults. American citizens that are aged below 18 are considered minor and require a guardian to obtain a passport. Passport for minors is only valid for 5 years compared to 10 years for a passport for an adult. Due to problems regarding child custody, which caused children being taken abroad without the consent of the parents, strict laws have been passed about issuing passports for children.

A child has to be there and accompanied by at least one parent when they are applying for the document. An official person can also go with them if the parents aren't there. This person has to offer proof that he is lawfully qualified to be their representative. The application should be made to an acceptance representative. Every child, from birth, should have a passport if he is traveling abroad.

There are cases when people have employed abroad or are traveling when the child is born. That child is not allowed to stay in that country nor go back to the U.S. with their parents if they don't have a passport. In a situation like this, the parents need to apply at a US Embassy to get the application processed. The requirements would be the same, which includes the identification of the parents as citizens.

Due to some well-exposed instances of kid abduction by unlawful parents, a law was approved in 2001 known as the Two-Parent Consent Law. On this law, both of the parents or guardians are required to sign for a child to get the document. Both of them must show proof that they're the real parents. If they're adopted, the adoptive parents have to bring adoption proof. Other guardians like grandparents are allowed to sign, however, only if they have they can show any proof to prove guardianship.

There is some exception, though, which allows a single parent to sign the application. While this is possible, there are cases when more documents are required. Such documents include courts orders, proof of sole custody, and other, depending on your reason, are accepted. The birth certificate of the child and other documentation should be provided. Minors applying for a passport are also not allowed to apply online. A personal appearance is required.

The law that comes with passport application is quite specific when there's a problem with the child's custody. A state court holds the authority to take the passport of the child if there's a threat that they may be taken out from the country. Additionally, a parent can request an Alert Program in order to inform the authority if an application is made for a child's passport.

The acceptance agents request for specific documents to be provided when the minor's passport is applied. They have the original copy of the child's birth certificate, the parents' identification, naturalization papers, two photos taken by the passport photographer, as well as the proof of the parent's relationship.

Crossing the border to Mexico isn't as simple as it was before. However, if you have the proper documents ready, it does not need to be a painful process. So, again, to answer the question, "Do kids need a passport to go to Mexico?" If you're traveling by sea or land, a US Passport Card is enough and acceptable identification for you and your kids to enter.

However, if you're planning to fly, a standard passport should be presented. To get more information about getting a passport for your kid, go to this link.

What do you think about the laws of Mexico when it comes to crossing the borders from the US? We want to hear your thoughts in the comment below!

How to Apply For Permanent Residence in Canada through Express Entry

Can You Fly with A Temporary Paper License? Here’s What You Need to Know

Do I Need A Passport Book and Card?