What Is the Cheapest Time to Fly to Germany? Find Out Now! 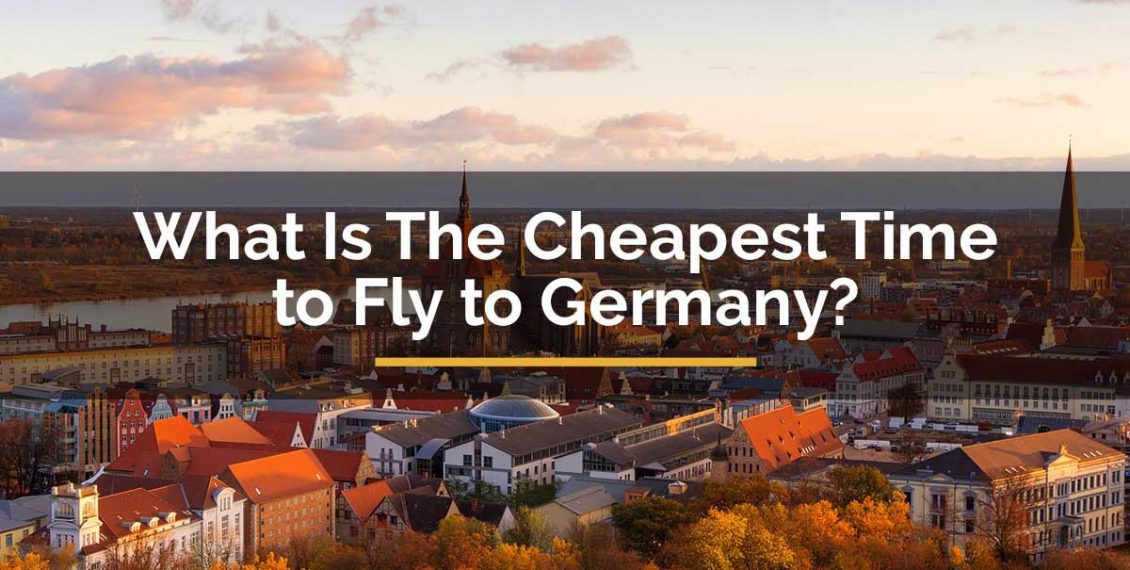 There’s no denying to the fact that Germany is one of the best destinations in Europe, if not in the world. But the problem many travelers face is that it’s not a cheap country to travel! Whether you're planning to explore it slowly or to spend a perfect one week in Germany touring the highlights, you might expect your trip to leave a big dent in your bank account. But it doesn’t have to be always the case. There are some ways to cut your expenses when traveling to this country, and one of those ways is choosing the cheapest time to fly to Germany if you’re coming from another country.

What Is the Cheapest Time to Fly to Germany?
When to Book the Flight
The Cheapest Time of the Year
Season Impacts Cost
Choosing the Best Flights
Activities to Enjoy Without Breaking Your Bank
Starkbierfest
Winter activities
Chase the Sun

When to Book the Flight

Knowing the best time to go to Germany will surely save you a fortune. All airlines constantly change their pricing all the time, however, there are standards in the industry that have emerged. In terms of European flights, the best way to get started is to search for fares offered during the low-season. On the other hand, if you really want to travel during peak season, then it might be a better idea to search at least 6 months before your intended trip as you’ll have more chance to score a cheap flight at that time. There’s no real science behind this, airlines price their flights depending on their own rules, so no one will really know its algorithm.

The Cheapest Time of the Year

There is a certain time of the year that is considered to be the cheapest time to go. You might want to consider going during the holiday season, which is between the month of January and March, as long as you don’t time it during Carnival in either Düsseldorf or Cologne. Another good time to go is during Germany’s America’s school holidays, which is in the last 2 weeks of October. If you want to visit Germany to enjoy the snow and skiing, then the best months to go is from January to March.

Fortunately, you will surely have a lot of things to do in Germany during the winter, mainly because in the eastern, northern, and south parts of this country, you’ll get a lot of snow. Because you are on holiday, you don’t even need to worry about shoveling snow, all you have to do is to enjoy the sight of the dust over the medieval buildings and houses, which makes the church tips look even more majestic, and of course, you will love skiing if that’s something you enjoy.

The season definitely plays a part on the cheapest time to fly to Germany. The low season in German is winter season, while the peak season is during the summertime, and the demand is seen on the prices of the plane tickets and hotel accommodations. Shoulder season would be a great option for traveling as this is when the weather is still pretty mild. If you want to visit Germany around April or May, then you might want to avoid the Easter holiday when schools are on a spring break. When looking at the autumn shoulder season, avoid Bavarian Oktoberfest dates in late September, particularly in Munich.

Read more: The Top 6 Most Spectacular Places to Visit in Germany for Kids

Of course, it would always be smart to fly to the city that’s not too far from the destinations you want to go to Germany. But if you are visiting Germany along with other European cities, then Frankfurt would be a perfect city to consider as your base.

Keep in mind that some days can be cheaper than other days. So, it’s best to search as early as possible to have more chance to get cheaper flights.

You can use some of the most popular third-party search websites such as Google Flights, Expedia, Skyscanner, and Kayak. Once you get the pricing results from these sites, you can go book from there or go directly to the airline’s official site, especially that it’s normally even cheaper to book directly from the official site. You may also want to search your flight while in incognito mode as most websites use cookies to keep track of your search history – when they see that you are booking the same destination frequently, they might make the price of the flight higher.

Activities to Enjoy Without Breaking Your Bank

Starkbierfest is like Oktoberfest, except it’s celebrated in the month of March rather than October, and you can only get strong beers. It is not as crazy as the other festival as this is meant to be more intricate mustachios, and generally, just a great time. Strong beer is served here by tradition during Lenten season and was initially made by Paulaner monks of Munich, who began brewing strong beer around 350 years ago. This festival usually takes place in March. Make sure you are not too young to drink though!

One of the best starting points for your winter vacation is Munich, for this city has the closest airport that service international flights to some of the best skiing spots in the country, as well as the best mountain ranges in the country, and on top of this, Switzerland and Austria are not very far. Most of the ski resorts you will find here also have huge toboggan runs, and you can also enjoy ski jumping.

This might come as a surprise, but if you want to escape the winter wonderland, then you must head to Cologne. This region is situated in the warmer region of Germany, and so Cologne hardly receive any real snow, and though there’s not much sun during the winter, it wouldn’t be too cold here at least.

Traveling to Germany on a budget shouldn’t be too hard when you know how to do it. Hopefully, this short article guided you on the cheapest time to travel in Germany. If you have other questions about this topic, then don’t hesitate to let us know about it in the comment box below!