What do You need To Know About Airports in Costa Rica? This Article Will Tell You! 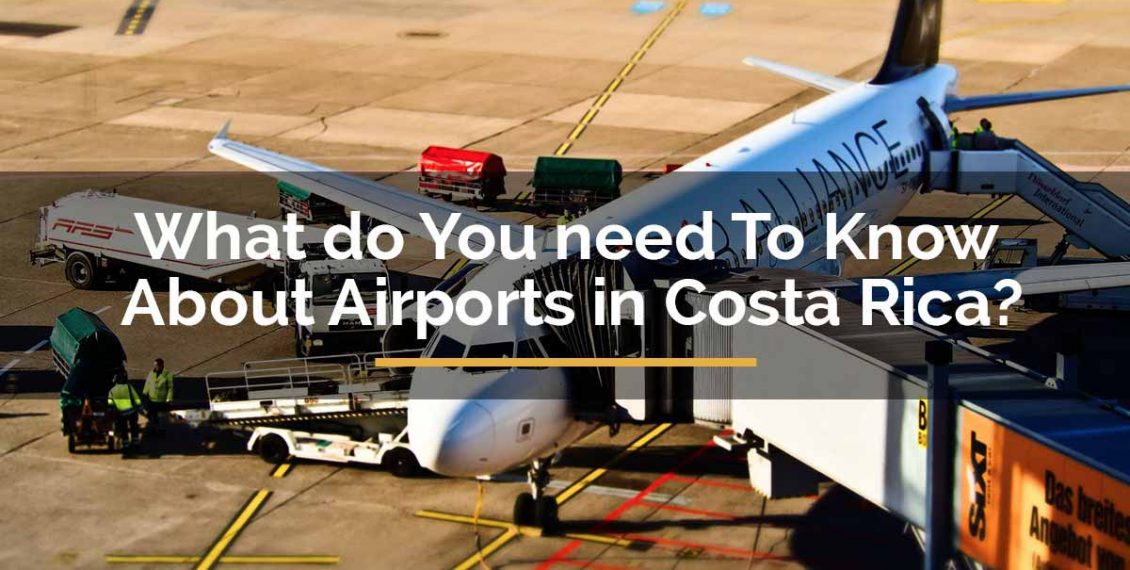 Before, the only way to get yourself to Costa Rica was to book a flight to The San Jose International airport and then take a car, bus, cab, or oxcart to get to your main destination. This is no longer the case. Costa Rica operates another international airport in Liberia, Guanacaste’s provincial capital to serve the Northern part of Costa Rica. Because of the Daniel Oduber Quiros International Airport, formerly isolated parts of the country have now become more accessible for both locals and travelers. The whole peninsula of Nicoya started to attract more investors. With the government of Costa Rica supporting the development, formerly unreachable parts of the country will become more accessible someday.

What do You need To Know About Airports in Costa Rica?
Domestic Airlines
Airlines That Travel Inside Costa Rica

The Liberia International Airport not just offers service to international travelers; in addition, it has become a significant center for local carriers to reach remote parts of Guanacaste Province and other domestic airports. With some parts of the country still remaining a bit unreachable, there are several areas that are easier to access by plane rides.

​Costa Rica is aware of this fact and with public-private support, has built a total number of 26 airports all over the country, offering an easier form of transportation for a lot of people who want to reach remote places. These airports let more tourists see formerly remote places, which brings in much-required income, though intimidating the environment throughout the process. A great push toward eco-tourism can help in keeping the balance between the two contrasting aspects.

For a pretty small country, navigating Costa Rica can be a real challenge. Getting to remote places like such as Osa Peninsula by car may take a lot of hours, and while the scenery throughout rural roads of Costa Rica can be remarkable, long trips are simply not the smartest option all the time. Luckily, domestic airports in Costa Rica are both affordable and convenient, which makes them the perfect option when traveling.

Costa Rica is proud of the assortment of its natural resources, so it’s not surprising the top priorities of the government is conservation. This pledge to the environment is supported by Nature Air, as the world’s first airline that is completely carbon-neutral. Nature Air operates over 70 flights daily to 15 different destinations all over the country, which include Golfito, Drake Bay, Tamarindo, and Manuel Antonio. Nature Air is also the biggest operator of chartered flights all over Central America, which makes it an outstanding option for biggest parties who are looking for the flexibility and freedom to set their own departure timetable.

Sansa is another dedicated to customer service, and its devotion is one of the main reasons it wins the recognition for Skytrax World Airline Awards’ best airline in the Caribbean and Central America for two successive years. The rates of Sansa are extremely competitive, and the carrier also offers special rates for children, and could also fly pets, cargo, and other exceptional travel necessities. Sansa also runs a frequent flier package with a points system managed by major carriers such as Lufthansa and United.

Like mentioned earlier, there are two main airports in Costa Rica. The first one is the Juan Santamaría Airport that’s easily accessible to the cities of Alajuela, San José, as well as Heredia. The next one is located in Liberia called Daniel Oduber Quirós International Airport.

Even though the Liberia airports are significantly smaller compared to the other ones, it remarkably accepts flights from major airlines such as Air Canada, American Airline, Delta, United, as well as Continental. These airline carriers that fly within Costa Rica links the country to international cities such as Atlanta, Chicago, Calgary, Houston, Dallas, Los Angeles, Miami, London, Vancouver, Newark, and a lot more.

There are also some domestic airports in Costa Rica’s major cities. In Limon, there’s an airport in the city itself and also one each in Tortuguero and Barra del Colorado. In South Puntarenas, you can get on five domestic airports such as the Coto 47, Carate, Golfito, Drake Bay, Puerto Jiménez, and Palmar Sur.

Airlines That Travel Inside Costa Rica

Costa Rica is becoming more and more known as one of the major countries in Latin American where tourism is thriving. So, the need for airlines that fly to airports in Costa Rica continuously growing and the government does its best to accommodate this demand.

There are different airlines that fly within Costa Rica both international, domestic, as well as charter flights. The Lacsa is the official flag carrier of the country, which has been operating since the year 1945 and is based in the major airport in Costa Rica.

Sansa Airline is a fully kept subsidiary of Lacsa and began operating in 1980. It has one Aerospatiale ATR-42-300 and nine Cessna 208B Grand Caravans. The carrier flies to about 18 destinations within the country.

Air Charter Service is another long-running carrier that flies to different airports in Costa Rica. It has been in the business ever since the year 1970 and is separated into two major but diverse divisions: Taxi Aereo Centroamericano and Aviones Taxi Aereo. The official base of Nature Air Airline is Tobías Bolaños International Airport located in San José. It started operating in 1991 to offer domestic flight services and it was previously named TravelAir.

Paradise Air flies to around 33 destinations in Costa Rica and is one of the main Air Charter carriers the fly within Costa Rica, Nicaragua, as well as Panama. Aeropostal Alas de Centroamerica is another carrier that serves the country. It’s a comparatively new budget airline that is also based in San José. This airline was established in the year 2003, even though it started operating in the year 2005.

As you can see, it is clear the flying is the best ways to go to Costa Rica and experience it fully! You can get aerial sights of airports and see the different entry points for airlines that the country has to offer.

Make sure to explore the airport terminals, departure gates, and customs checkpoints before you go on your trip. You will feel like you’re a frequent visitor of the country, even if it’s your first time. If you’re traveling together with your family, you are able to make your trip easier by doing research beforehand.

Airports in Costa Rica are no different from most airports in other countries. The government does its best to improve the services to make it easy for both locals and foreign travelers to travel in, out, and around the country.

So, what can you say about the airports in Costa Rica? Do you have any tips to make flying easier when traveling in the country? Let us know in the comment below!

How Is Costa Rica in July? Here are What You Need to Expect

Where to Stay In Belize? Here Are Important Things You Must Know